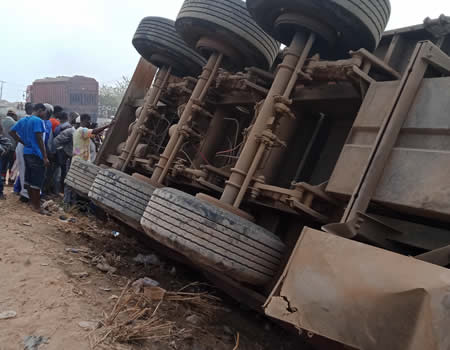 Despite sad experiences of explosion and fire, residents of nearby communities along Kwale-Ogwashi Uku expressway in Delta State, on Wednesday, trooped out in their numbers to scoop fuel from a fallen tanker.

The tanker carrying about 13,000 litres of petrol to be discharged at Adagor filling station in Ogwashi Uku fell in the morning hours between Obikwele and Ossisa communities near Kwale in Ndokwa west council of the state.

The cause of the crash was sketchy at the time of filing this report but unconfirmed report said the driver dozed off before the accident occurred.

Soon after the small tanker emptied its content, villagers were said to have invaded the scene with cans and buckets to fetch fuel.

Providence, however, paid off as men of the state fire service arrived the spot on time to douse the surroundings with chemicals in order to forestall any outbreak of fire, the director of the service, Mr Eugene Oziwele told Tribune Online.

Confirming the report, state police public relations officer, DSP Onome Onowakpoyeya, advised against the actions of those scooping fuel from the scene saying it was a dangerous adventure.

Last week, Nigeria recorded a total of 4850 recoveries, the figure which is the highest the country has recorded in four weeks, Tribune Online reports.