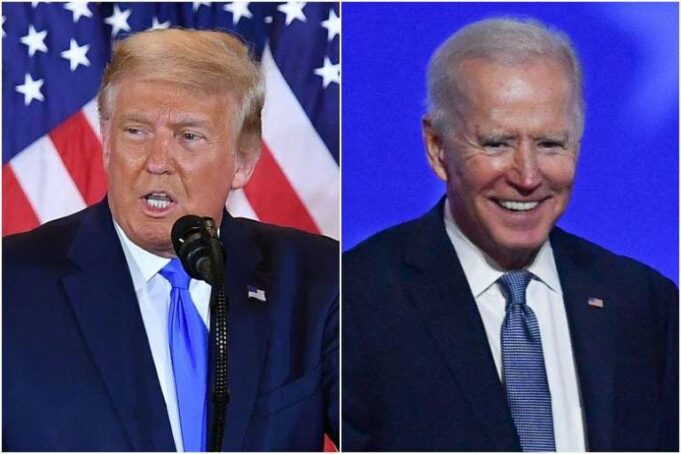 A tense US presidential election was still undecided on Wednesday amid delays in vote counting in some key swing states, even as President Donald Trump claimed that there was a fraud being perpetrated against him. The outcome of the race now appears to be down to six states: Georgia, Michigan, Nevada, North Carolina, Pennsylvania and Wisconsin.

The former vice president is ahead in Nevada, Wisconsin and in Michigan by slim margins, while Trump maintains a lead in the remaining three states. Trump railed against the development in a slew of tweets, saying without evidence that a lead he claimed he had in several key states had “magically” disappeared overnight. “Last night I was leading, often solidly, in many key states, in almost all instances Democrat run & controlled. Then, one by one, they started to magically disappear as surprise ballot dumps were counted,” he tweeted.

Twitter again labelled the president’s tweet as possibly misleading, the latest social media post from Trump to face warning labels. Early leads can often be reduced or overturned, depending on which counties in any state report first and how mail-in ballots are tallied.

Biden campaign outraged Trump trying to ‘shut down’ vote counting In an overnight speech, Trump said – again without offering proof – that there was “major fraud” under way and threatened to take the fight for the election to the courts. At around the same as Trump tweeted, Biden urged patience, writing on Twitter: “We won’t rest until everyone’s vote is counted.” Biden was ahead of Trump in the nationwide popular vote, with some 2.6 million more votes. But in some cases, like Trump’s 2016 victory, a candidate can win the crucial Electoral College vote – such votes are allocated on a state-by-state basis – without winning the popular vote.

In Pennsylvania, a populous battleground where Trump maintained a lead, Governor Tom Wolf said the state’s outcome might not be known on Wednesday as “millions of mail-in ballots” were still being counted. “We may not know the results even today, but the most important thing is that we have accurate results, even if that takes a little longer than we’re used to,” Wolf, a Democrat, told a press conference, stressing that “every vote counts.”

It remains unclear who will win the swing state when all of the votes are tallied. Many Republicans chose to vote in-person, while Democrats embraced mail-in ballots which have yet to be fully counted. Turnout this year, as a percentage, has been higher than any other election since 1900.

Pennsylvania is likely to be the focus of Trump’s legal team’s efforts. His campaign also said they will “immediately” file petitions for recounts in parts of Wisconsin, alleging there were irregularities in the razor-thin race. In his early-morning speech, the president threatened to turn to the Supreme Court and said he wanted “all voting to stop,” but it was not clear exactly what he hoped to accomplish. States run elections and Trump would have to first go through lower-level courts.

Biden’s team said it had lawyers ready to fight back. Biden has kept his cool throughout the nail-biter of an election, and is expected to again address supporters during the day. “Keep the faith,” he told his loyalists just after midnight. Trump threw the country into a state of uncertainty as he appeared to declare himself the victor.

In stark contrast to the tone struck by Trump, Mitch McConnell, the top Republican in the Senate on Wednesday said the election result had not been decided. “We are awaiting the judgement of the American people,” McConnell told reporters in his home state of Kentucky. McConnell, who won re-election, said it was also unclear if his party would maintain its majority in the upper chamber of Congress, though Republicans beat back Democrats in key Senate races. The Democrats maintained their majority in the House of Representatives. DPA

Eedris Abdulkareem Showers Encomiums On His Wife On Their 16th Wedding Anniversary.