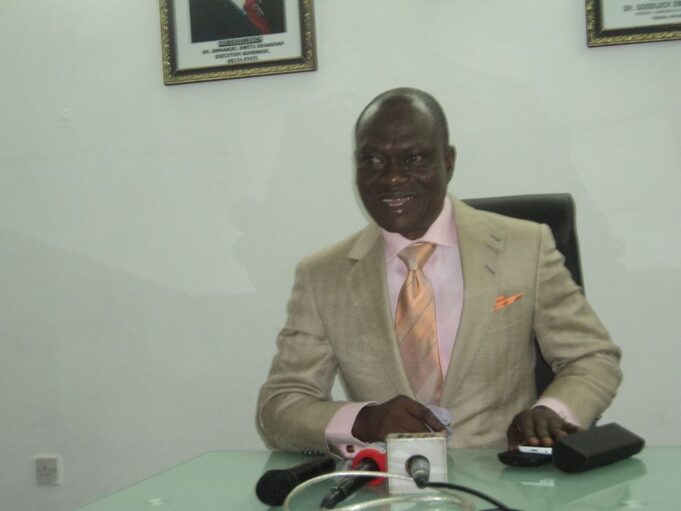 Comrade Ovuozourie Macaulay is a trained journalist who rose to become the pioneer Chairman of the Nigeria Union of Journalists (NUJ), Delta State Council, and later became Chairman of the Nigeria Labour Congress (NLC). He retired voluntarily from civil service at the end of his tenure as NLC chairman in Delta State. After his retirement, the then Governor, Chief James Onanefe Ibori, appointed him as Commissioner for Special Duties in charge of Conflict Resolution. He served twice as a Commissioner, Chief of Staff and Secretary to the State Government (SSG). He is the Okiroro of Isoko nation. In this interview, he spoke on his 60th birthday, what life was like growing up and his challenges. Excerpts

Today you are celebrating your 60th birthday anniversary. How has life been?

One must be grateful to God because turning 60 in this our present situation in Nigeria in particular, and the global situation in general, as it relates to hardship, health and lack of facilities, is not easy. Turning 60 is a great challenge. Growing up was very challenging; up till date, life has been full of challenges. I was born barely six years before the Nigerian civil war. It turned out that my parents were in the East and I was born in the present day Imo State. That means when the war started, my parents were supposed to have relocated, back home, but they didn’t know that the war would escalate to the extent it did, with deaths that forced them to vacate a place they had lived all their lives. We ran away about the time a child should be starting school, which affected my early academic life as I could not start when my mates started and I lost some years to the civil war.

Finally, my parents tried to find their feet in their new location. My father had challenges, he was down and the whole family was affected as a result of his illness. As they were trying to take on what life had left for them, my father had an accident and died in 1972. He was a young man then. That again affected me as we had to relocate from Ughelli back to the village, because of my father’s demise. Back in the village, I was in primary five and about 12 years, which became another challenge, because leaving Ughelli, a township, to the village was also very challenging. Of course, one had to adapt. And I got into secondary school at 13 going to 14, not now that children enter secondary school at 10. I faced another major challenge having no father; my mother tried her best to provide for us. The family felt I should attend a Teachers’ Training College, which was free with boarding facilities inclusive. And after five years, whether you passed or failed, you were certain of getting a teaching job.

Somehow, my spirit didn’t take Teachers’ Training College, so I protested against my mum and uncles who mooted the idea. They saw my protest as stubbornness for rejecting a free of charge school. But, I looked at the lives of teachers, and it was not motivating to me then. Yes, they buy bicycles, some lucky ones will occupy teachers’ quarters in a dilapidated room and parlour. Coming back from the township and looking at this type of people, I stood my ground against it and decided to go on hunger strike instead. Luckily, that was about the time secondary school was approved for my village. I went for the interview and passed. So for me, it was better to be a day student in a Grammar School, because the problem was money, than to attend a Teachers’ College. That was how I overcame that challenge and ended up in a Grammar School.

When I finished my secondary education, I was one of the first five bright students that the school could boast of. I finished well, but to further my education became an issue. Who was going to provide the funds? During holidays, while in secondary school, I used to engage in some menial jobs. Aside from stealing, there was nothing menial I did not do to support the family. I sold garri in the markets. At weekends, I would go to Kwale, where my farms are now, I would uproot cassava, process them and went back to Isoko market to sell. I had done hunting; I had tapped rubber. The best of the jobs was going to building sites to help people moulding blocks and carrying concrete, just to earn a living as a student. When I finished Secondary School with required credits, I passed my JAMB to read Law at the then University of Ife (now Obafemi Awolowo University), Ile- Ife, Osun State. Another task presented itself as not even transport fare was available as there were no uncles to help out. Not these days of ‘ose’, ‘ose’. We never did such things. I went into teaching as an Auxiliary Teacher that I had detested, first at Obodoeti Primary School, Emu in present day Ndokwa West, as they did their recruitment first. Two months later, Isoko did theirs and I left for Atebo Primary School, Oghara-Iyede, in Isoko North. But few months into that, an opportunity came through a relation whose husband was working at the Federal Ministry of Information, Benin, and they were looking for Public Enlightenment Assistants, with credit in English. I applied and got the job. That was how God moved me back to the city after spending so many years in the village. From there, we had our in-house training at the National Institute of Public Information, Kaduna and University of Lagos. I grew up in Journalism, which was one of my dreams, aside law.

How was it like growing up with you parents?

I talk more about my mother and my maternal grandparents, because I never met my paternal grandparents alive. Like I said earlier, my father died in August and I was 12 in October same year. I was just promoted from primary four to five. My mother has been a source of inspiration in my life. She taught me a lot of things. Even in her hardship, we were told not to lie, steal and not to kill, but to be honest at all times and say the truth at all times and that hard work pays.

From my grandfather, he thought me never take a decision when you are angry, never to fight over money and also a fellow man over a woman, even if she is your wife. I asked him how, his reason was that when you open the door and look outside, you will see more beautiful ones. If you fight and die because of a woman, you are gone. And you can never be sure if that same woman will not end up going back to same man. So, walk away and look for a better one outside. He also said that money has no end. He said that money is like water; it flows. It has its season and it comes when it is its season, but if you kill yourself over one misunderstanding you have with one fellow human being, you will not have an opportunity to make more money. But for as long as you are alive and you remain hard working you will make more money. These were what guided me in these 60 years of my life.

As a politician, haven’t you deviated from your mother’s admonition of not lying, stealing and killing?

Not me. That is why most times I stand alone and I don’t regret it. If my honesty would be a reason for them to gang up against me, so be it. My conscience is my guide, because when I kneel down to pray, all I know is the fear of God. I hear them say politicians belong to cult, I don’t even belong to any ethnic club, Iet alone a cult. As human I may have some short comings, but Christ said He came to die for the sinners. Though not enough for me to do what I know is wrong. I won’t lie because I am a politician. If telling you the truth will make you not to support me, so be it.