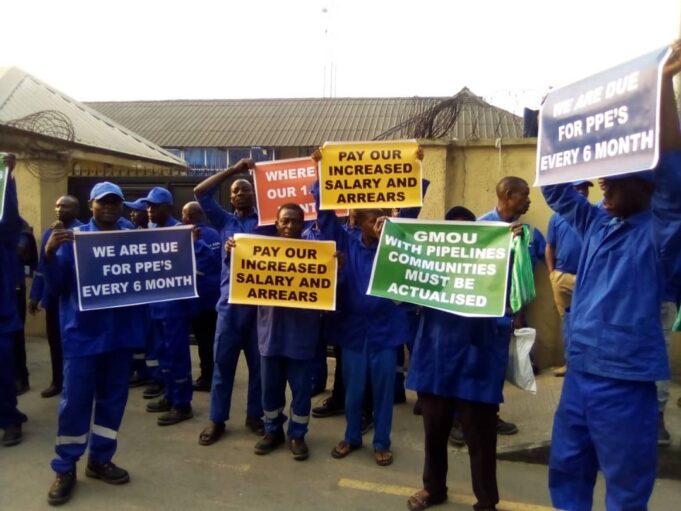 There was complete pandemonium at the Seplat Energy Base Offfice in Sapele as Surveillance Guard of Seplat
pipeline and impacted Communities stages protest demanding for their entitlements from the Oil company.

The protesting workers who are agrrived were seen carrying various placards and banners with different inscription such as: Seplat pay our increased salary and arrears, we are due for PPE’s every six months, GMOU with pipeline Communities must be actualised among other demands by the aggrieved protesters.

Addressing the protesters, the Production Operation Manager of Seplat, Mr. Yahaya Ismail said that their demands is been looking into already.

Yahaya Ismail while speaking on behalf of Seplat, appealed to the workers to remain calm as the various issues raised will be addressed at a meeting with the management of the Oil company and leaders, chairmen and stakeholders of the pipeline and impacted Communities tomorrow February 3rd,2022 in Sapele as invitation letters are already been circulated.

On his part, Mr. Alex Igbaran , Chairman of Jakpa -Mereji Pipeline and impacted Communities while speaking with Journalists said that the protesting workers are demanding for their rights, maintening that, Seplat has failed to keep to all their promises over the years.

Mr. Igbaran who spoke on behalf of the aggrieved protesters, enumerated the various issues while they are protesting, raging from failure by the Oil company to increase the Survelance Guards salaries just as mentioned in the various placards as mentioned above.

He urged Seplat as a matter of urgency to look in to their demands and do the needful.