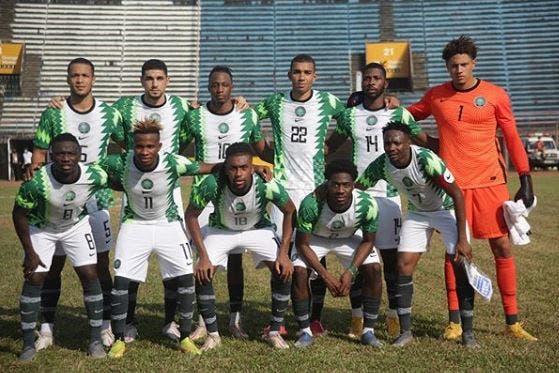 The Super Eagles of Nigeria on Tuesday in Freetown drew goalless with hosts Leone Stars of Sierra Leone.

The result helped them to maintain their leadership of Group L in the qualifying competition for the 2021 African Cup of Nations (AFCON).

It was another draw for both sides after last weekend’s thrilling 4-4 result in Benin City.

But this time around, it was in a much less exciting manner.

Kelechi Iheanacho was the first to ask questions after eight minutes, but his effort was saved by Sierra Leone goalkeeper Mohamed Kamara.

Samuel Chukwueze tried his luck at the quarter hour mark, only to see his ball kissing the upright.

The hosts had their glimpse at Nigeria’s goalkeeper Maduka Okoye after 21 minutes through Kei Kamara, but Okoye was up to the challenge.

Alhaji Kamara could have given the hosts the lead just before half-time, but Okoye came to Nigeria’s rescue as the first half ended goalless.

Six minutes after the break, Chukwueze found Iheanacho whose shot went over.

Iheanacho thought he had given Nigeria the lead at the hour mark, but his goal was ruled offside.

The Leicester City FC player was always the man behind the Super Eagles’ dangerous forays, and eight minutes from time his effort from close range was saved by Kamara.

The News Agency of Nigeria (NAN) reports that the Super Eagles have now raised their tally to eight points from four games in the group.

They are one point more than second-placed Benin Republic who drew goalless also with hosts Lesotho in Maseru earlier in the day.

Sierra Leone are with three points, while Lesotho are with two points, after four games each.(NAN)