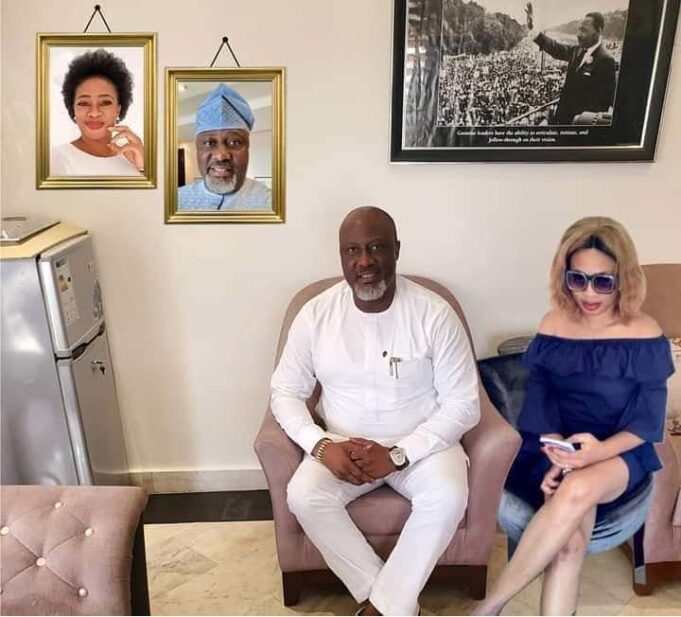 According to the controversial politician who is a divorcée, he is not aware of of any marriage plans with the lady simply identified as ‘ Susu’
Dino Melaye shared the e-Invitation card on his verified Instagram page and expressed his disappoinment.

“419 taken too far. General Public i dont know this person talkless of marriage. Even for film it can’t happen. SDM is not available ooo,” he captioned the photo.

It would be recalled that earlier this year, there were rumours of Senator Dino Melaye’s engagement to Nollywood actress, Iyabo Ojo.

It was reported that Dino and Iyabo got engaged late 2019 when she added the ‘olori’ title to her Instagram profile page and have concluded plans on their upcoming wedding spearheaded by Canada based actress Lola Alao who brought them together.

However,  Dino Melaye debunked the rumour that he is engaged to Iyabo Ojo. According to the senator, bloggers who came up with the engagement story needed a name to sell their story, which is why they came up with such story.

He added saying he can never have a secret engagement.
Dino also promised to release a ‘single’ about the rumours about him flying around.
He wrote on Instagram;“OHUN TO BA WU ELENU LO LE FI ENU SOO..EFI WON SILE..EJE KAN MA SO LOO…
Meaning people can decide to they whatever with their mouth