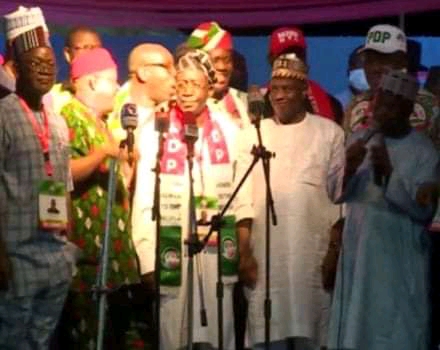 Senator Iyorchia Ayu, the former President of the Senate, was declared winner as PDP National Chairman

Senator Samuel Anyanwu, from Southeast emerged winner of the National Secretary of the party unopposed.

Eighteen (18) out of the 21 National Working Committee (NWC) offices were unopposed.

Chairman of the Convention Planning Committee and governor of Adamawa state, Ahmadu Umaru Fintiri, who announced the results commended party faithful for what he described as a successful National Convention.

In his appreciation speech, Ayu boasted that PDP is back to rescue Nigeria from the terrible mess it has been in the last six years, adding that the success of the convention is a quit notice to the ruling APC.

Berating the ruling party and others who wished that the convention will PDP to breakup, the former President of the Senate said that they are dreaming in wonderland and that their dreams were misplaced.

Appreciating all who took time as delegates, observers, supporters, members of the media and members of the security services, to make the event wonderful, Ayu added that PDP will come back to unite the people and put them together.

“Those who have lost hope should know that Nigeria is not a divided country. A small group of people decided to divide Nigeria. PDP will come back to unite our people, put them together, North and South, East and West.