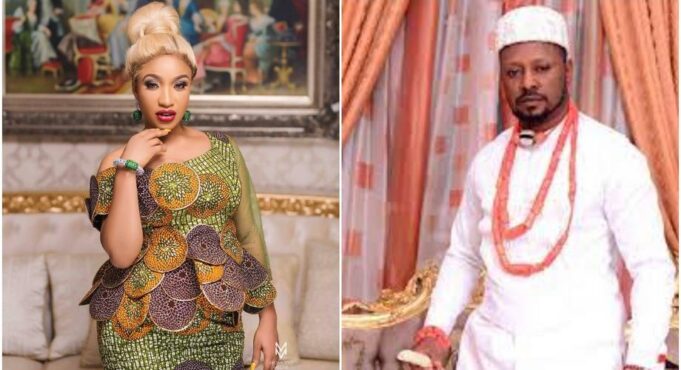 Police authorities at the Force Criminal Investigations and Intelligence Bureau (FCIIB) have released Prince Kpokpogiri Joseph, the estranged lover of Popular Nollywood star, Tonto Dikeh who was arrested at Trandcorp Hilton Hotel Abuja on Tuesday over his violent behaviour and the threat by one of the policemen he took to the hotel, to open fire on Tonto Dike.

Kpokpogiri was released after he assured the police to be of good and controlled conduct while following lawful, legitimate means to resolve any issues involving him and his estranged ex-lover.

Recall that Prince Kpokpogiri who is currently facing a pending investigation at Force CID was said to have bypassed Police authorities, went and hired 2 police officers attached to Maitama Police station, took them to Transcorp Hotel and threatened to open fire at Tonto Dikeh if she did not hand over the keys of an SUV to him.

It was learnt that in the early hours of Tuesday 19, October, 2021, at about 12.30 am, Prince Kpokpogiri took his driver and two policemen and went to Transcorp Hilton.

“They blocked a vehicle that was packed there and stayed till 6am. Kpokpogiri’s driver said he gave the keys of the vehicle to Tonto Dikeh but Prince Kpokpogiri alleged the car was stolen.

In the confusion and argument that ensued, one of the policemen pointed his gun on the head of Tonto Dikeh, prompting the management of Transcorp to alert the Police.

DIG Joseph Egbunike who is in charge of FCIIB subsequently deployed the Commissioner of Police in Charge Administration at Force CID, CP Umar Sanda and some police operatives to the scene.

At the scene, Prince Kpokpogiri was said to have become violent and was allegedly raining insults and curses on the Police officers while all entreaties for him to calm down failed.

Consequently, when DIG Egbunike was briefed about the conduct of Prince Kpokpogiri, he ordered the arrest of the Prince and the policemen that the prince came with.

His arrest is to enable him regain his sanity after which he would be questioned on the issue about ownership or otherwise on the vehicle in question.