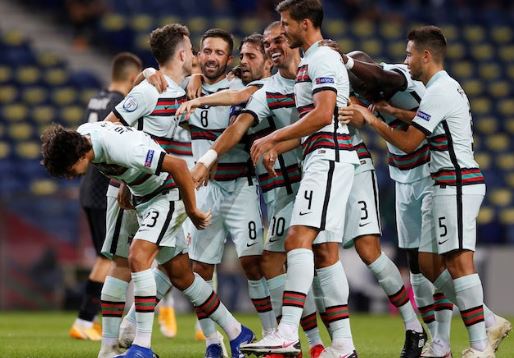 Juventus forward Ronaldo scored both goals in last month’s 2-0 victory in the reverse fixture but was ruled out of this match after testing positive for coronavirus on Wednesday (AEDT).

Jota, brought back into the line-up for Thursday’s clash in Lisbon, stepped up by playing in Bernardo Silva for the opener and then scoring the second before half-time.

The Liverpool attacker rounded off the scoring 18 minutes from time as the Nations League holders returned to winning ways after successive stalemates with Spain and France over the past week.

William Carvalho headed against the post inside four minutes when left unmarked at the back post but the hosts did not have to wait much longer to find a breakthrough.

Bruno Fernandes turned over possession, slipped in Jota and the Liverpool winger squared for Silva to curl past Robin Olsen with a first-time finish from 10 yards.

Portugal survived a scare when Marcus Berg’s shot hit the post and they had some breathing space nine minutes later as Jota controlled Joao Cancelo’s pass and tucked in.

Rui Patricio produced a couple of good saves to keep out Berg and Viktor Claesson early in the second half as Sweden – without a point from four Group A3 games – pushed for a route back into the game.

But it was Fernando Santos’ men who scored the game’s third goal through Jota, who took the ball past a few players and picked his spot past Olsen after being found by Carvalho.