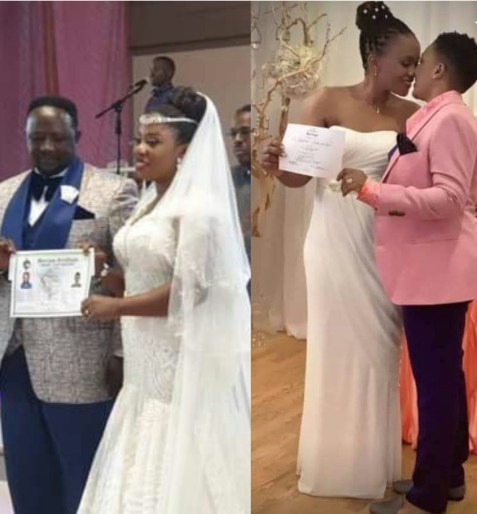 The news is the current topic of conversation among Ugandans on social media.

It was gathered that Julie Mutesasira and Pastor Mutesasira were married for many years and they have three children together including Esther and Ezekiel (the 2019 winners of the first season of East Africa’s Got Talent).

Their marriage ended in a bitter divorce. After they officially divorced in 2016, Julie relocated to Canada, leaving her three children behind with their father.

On Monday October 19, he shared photos from his wedding along with an emotional letter to his new wife saying that they have now turned into one entity for the lifetime.

“An excellent wife is the crown of her husband, but she, who shames him, is as rottenness in his bones (Proverbs 12:4). Marriage is a life-long covenant between a man and a woman to live as one flesh, for their mutual benefits, and for the bearing of children,” Pastor Steven wrote.

“The relation of husband-wife is the most beautiful relational of the world. It’s the relation by which two different people turn into one entity for the lifetime,” he added.

A few days after his post, photos of his ex-wife, Julie Mutesasira’s wedding to a fellow woman emerged.

UEFA Announce 50 Nominees For Team Of The Year