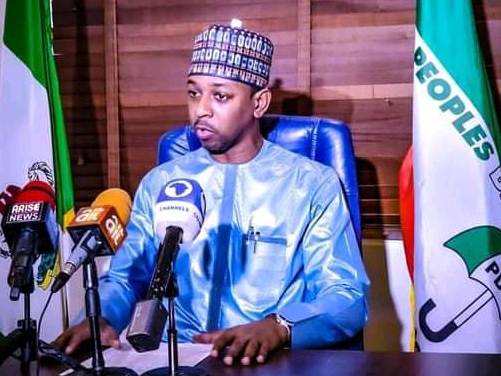 The Peoples Democratic Party
(PDP) governors on Friday reacted to the impeachment of
Zamfara State deputy governor,
Barr Mahdi Gusau, two days after he was removed.

Describing the removal as
an immoral, illegal and unfortunate impeachment, the governors, under the aegis of PDP
Governors’ Forum, condemned
what they called, “naked and unconstitutional abuse of power.”

The PDP Governors’ Forum, in a statement by its Director-General, Hon CID Maduabum, said, “it is immoral,
perfidious and an affront to the
rule of law for an illegally constituted House of Assembly to
purport to oust a validly elected
Deputy Governor, just because
he towed the path of honour
and followed his oath of office by
remaining faithful to those that
elected him as a PDP member.
“It should be noted that the
entire Zamfara House of Assembly decamped from PDP
to APC without any form of
division in PDP and therefore
should lose their seats as required by the constitution. Such
an unconstitutional body has no
power or mandate to impeach
the Zamfara Deputy Governor.
“But it is even worse when
there is a subsisting suit on the
matter for which a court had
granted preservative orders in
the past.”

The PDP Governors Forum
said it would support a return to
legality and constitutionalism “in
this unfortunate Zamfara affair.”