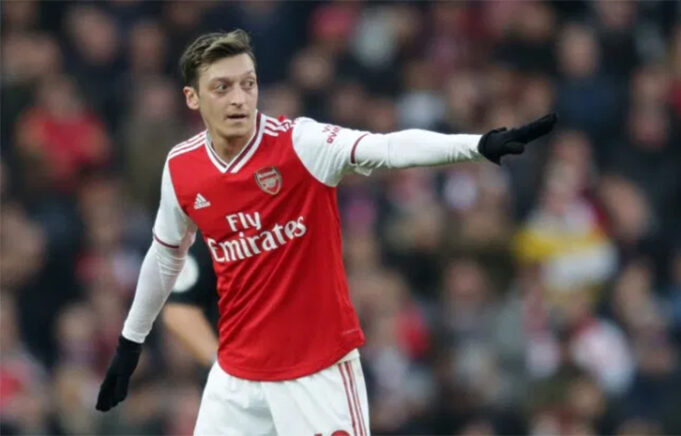 Mesut Ozil has already pulled on an Arsenal shirt for the final time, according to former Gunners striker Kevin Campbell.

The Germany international, who is in the final year of a lucrative contract, is yet to feature for the north London club under Mikel Arteta this season.

Ozil remained in north London over the summer despite falling out of favour under the Spanish boss last season, when he scored one goal in 18 Premier League appearances.

Campbell, who won the First Division and Cup Winners’ Cup during a seven-year spell with Arsenal from 1988-1995, can’t see any way back for the 32-year-old.

“Mesut Ozil is yesterday’s news at the club,” he told Genting Bet.

“There is no chance that he will feature for Arsenal again this season, or ever again.

“There have been certain things that have gone on, instances where he has gone against the club, so I don’t see where there is any room for him to come back.”

Ozil was a club record signing when he arrived from Real Madrid in a £42 million deal in 2013.

He has been cut from the club’s Europa League squad this season and is at risk of missing out on a place in the final Premier League squad.

But the man who brought him to the club, Arsene Wenger, believes Ozil can still have a future at the club.

“What happens at the moment between him and the club looks to be more confrontational. It’s not based only on sport.

“If Ozil cannot play in the Europa League, I’m sorry, but this guy has won things, he’s a world champion, he’s an exceptional football player.

“Why is he not playing at the moment? I don’t know. When you’re a football player you have to respect the decision of your manager and fight to get the confidence back and fight to get back in the team.

“He can fight, contrary to what people think. He has enough quality to get back into the team, that’s down to him now.”

FG To Engage Stakeholders To Secure U.S Endorsement Of Dr Okonjo-Iweala In WTO.