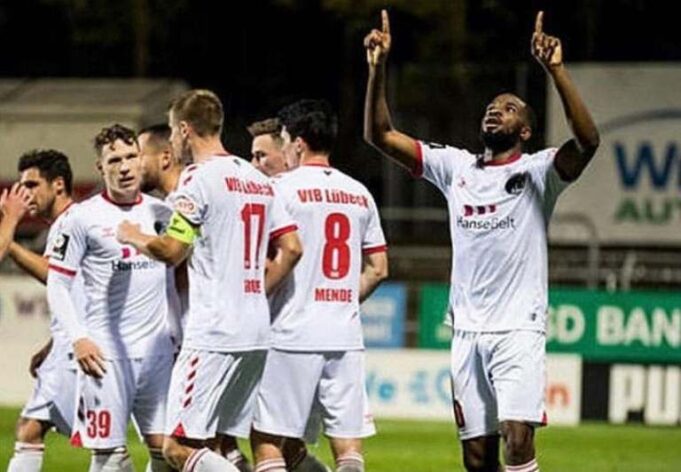 Okungbowa scored the second goal for his team on 39 minutes, to seal the win for the travelling side. German forward, Tommy Grupe had given VfB Lübeck a 1-0 lead barely six minutes into the start of the game, which prompted spirited attacking forays from FC Viktoria Köln, who podded for the equaliser, which however was not possible, given the excellent defensive display of the away team.

Despite having the higher chunk of ball possession, at 54 percent, the home team found it difficult to bridge the defensive wall of VfB Lübeck, who added the second of the day, six minutes from half time, this time from Okungbowa, who was provided with the assist by Ersin Zehir. Okungbowa’s goal took the wind off the sails of the homers, who were to put it mildly, rattled by the former Austrian Vienna player, who had a great performance.

The talented natural-left-footer, later took to social media to celebrate his goal, which he dedicated to a late friend, Martin Oyairo.

Writing on his official Instagram page, Okungbowa wrote: ”RIP Martin Oyairo. This one was for you bro.” This was VfB Lübeck’s first win in eight matches and the team will hope it is the start of great things to come for the team. Okungbowa won two back-to-back man of the match awards for his German side, making him a strong contender for the club player of the season award cone the end of the 2020-2021 football season.