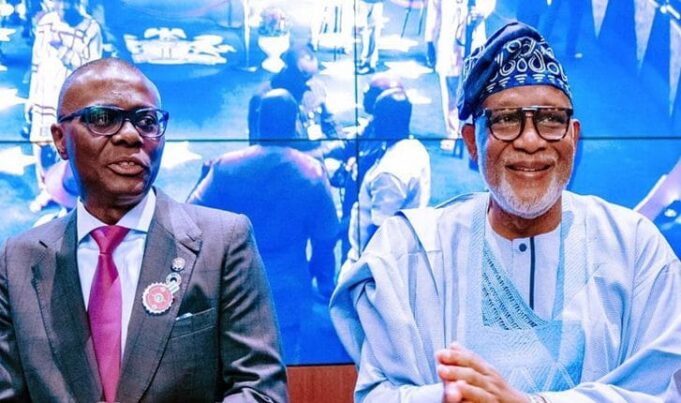 Lagos State Governor, Babajide Sanwo-Olu, has congratulated his Ondo State counterpart, Oluwarotimi Akeredolu (SAN), on his victory in the Saturday’s gubernatorial election in the state, describing it as well deserved.
According to a statement made available to newsmen by his Chief Press Secretary, Gboyega Akosile, on Sunday, Sanwo-Olu, who is the chairman of the All Progressives Congress (APC) National Campaign Council for Ondo State Governorship election, said Akeredolu’s success in the election is a validation of people’s acceptance of his administration, having impacted positively in their lives during his first term in office.

Speaking at Akeredolu’s residence in Owo on Sunday shortly after the Independent National Electoral Commission (INEC) declared Governor Akeredolu and his running mate, Lucky Aiyedatiwa as governor-elect and deputy governor-elect respectively, said the people of Ondo State deserve commendation for coming out en-masse to perform their civic responsibility and for defying all odds to vote for APC-led administration in the state.

Governor Sanwo-Olu said Akeredolu’s victory is a clear manifestation that the APC remains the party of choice for Nigerians, stressing that the party will continue to work in the best interest of Nigerians.

He said: “I must congratulate my brother, Governor Akeredolu for being victorious in last Saturday’s election. His victory across the state is a confirmation of the trust and belief of the people in the APC-led administration in Ondo State, having benefitted immensely from the various people-oriented programmes of his administration.

“The real winners at the end of the day are citizens of Ondo State because indeed they have re-elected a “talk and do” governor. The victory is deserving.

“Looking at the performance of Governor Akeredolu in Ondo State, it is clear to me that Ondo people know what is right. And they have done what is right by giving him an opportunity to continue his good work.

“Our victory in Ondo State is an assurance to us that we are doing something right. We know there are areas of improvement and we are determined to ensure that we give Nigerians the best they deserve.”

The governor also commended President Muhammadu Buhari for creating a level playing ground for the conduct of the election, adding that the President deserves commendation for deepening democracy and the electoral process in Nigeria, considering the success recorded in the Ondo governorship election, as well as last month’s gubernatorial poll in Edo State.

“I appreciate the leader of our party, President Muhammadu Buhari; Vice President Yemi Osinbajo, the caretaker chairman of our party, the Governor of Yobe State, my colleagues and other APC leaders, especially members of the National Campaign Council for working tirelessly for the victory of our party in the Ondo State governorship poll.”