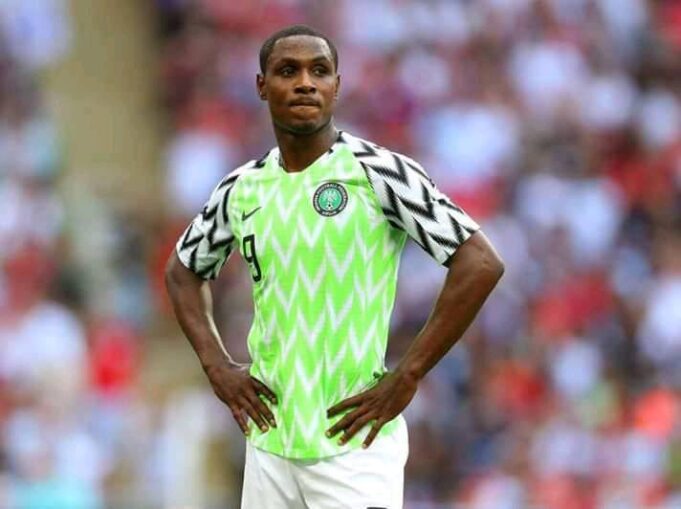 Odion Ighalo may call off his internation­al retirement in fu­ture if the opportu­nity for him to represent the country arises again.

The opportunity, accord­ing to him, might be if the country qualifies for the FIFA World Cup or the Africa Cup of Nations, saying he would think about the opportunity before deciding.

He expressed this in a vid­eo interview with espn.com on Thursday.

“If the opportunity arise for me, maybe one World Cup, maybe Africa Cup of Nations (AFCON), I will think about it, I would decide,” he said, adding that, his retirement from the Super Eagles was “too soon.”

Ighalo called time on his international career after the 2019 Africa Cup of Nations in Egypt where he emerged the top scorer.

“I felt that it was a bit too soon,” he said, revealing that pressure from his Chinese club, Shanghai Shenhua, contributed more to his early retirement.

“There was a lot of pres­sure back from my team because I got injured at the AFCON and was out for eight weeks. So with all those pressure travelling from China back to Nigeria to play is long hours you know, so I decided to stop.

“I still have good commu­nication with the coaches, they want me back. You can’t be playing for Manchester United and not playing for your national team.

“But I am still thinking about the options. I told him for now am still concentrating on club football. For now I just want the young boys do that and watch them from home.

Ighalo, whose loan spell at United ends at the end of the month will return to China but would jump at the oppor­tunity of playing in the MLS.

He said that he did not regret playing for United be­cause it was the pinnacle of his career and that he will look back on his time at Old Trafford with great pride.

“It was a good one and a tough one, before I came to United I never thought I would play,” he said. “I’m a Reds fan.

“I can tell you I’m the hap­piest man on earth for my dream to come true, I fulfilled my dream.

“I remember the night my agent called me to tell me Manchester United wanted me, it was 10 or 11pm. Shang­hai time. I was under my bed naked, I didn’t sleep until day­break.

“I don’t care about a pay cut, I just want go to Man­chester United because this is my dream. I was under my bed shivering and walking around my room and I did not sleep until 6am.

“I’m fulfilled as a football player, if I don’t achieve any­thing from now when I finish my career I am fulfilled.”