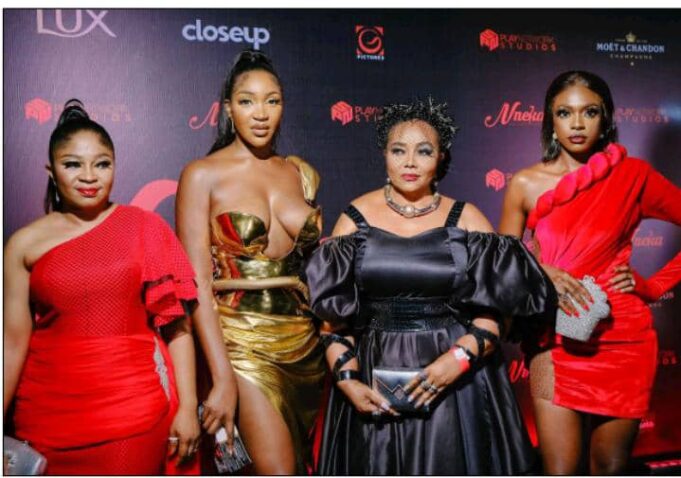 It was all about vainglory and lascivious enticement at the themed premiere of one of the most anticipated movies of the year, ‘Nneka The Pretty Serpent’ as guests stunned the black carpet on Sunday, 13th December at Genesis Cinemas, Palms Mall, Victoria Island. ‘

‘The Seven Deadly Sins’ was the theme of the premiere, and guests showed up dressed as one of the Seven Deadly Sins – Pride (Violet), Wrath (Red), Sloth (Black), Gluttony (Orange), Lust (Blue), Envy (Green) and Greed (Yellow) for the evening.

The premiere had a host of entertainment stars in attendance including Adunni Ade, Stephanie Coker, Uti Nwachukwu, Denrele Edun, Omawumi who were all elegantly dressed. Nneka The Pretty Serpent was executively produced by Charles Okpaleke, founder of Play Network Studios, directed by Tosin Igho and produced by Chris Odeh. It is a classic remake of the 1992 Zeb Ejiro film.

Nneka must avenge her mother’s assassination. On this journey, she discovers innate powers, realizes she has been deceived, stumbles on wealth and has to decide if the mission is worth losing the love of her life for. Can she defeat this diabolical force?

The movie garnered a standing ovation from guests at the premiere and reviews have been pouring in ahead of its release in cinemas. Distributed by Genesis pictures, Nneka The Pretty Serpent will be out in cinemas nationwide on the 18th of December 2020.

Villagers Scoop Fuel From A Fallen Tanker In Delta

So Painful I Didn’t Have Opportunity Of Seeing My Mom Before Her Demise— Makinde...