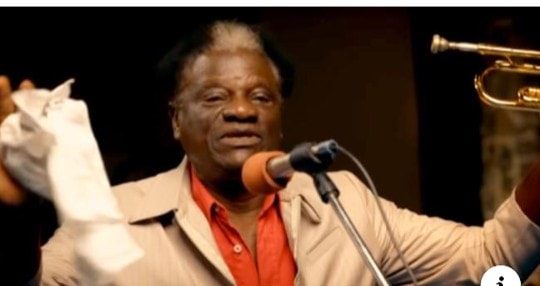 In 2020 we said goodbye to a number of public figures from the world of stage, screen, sport, music and more. Icons and celebrities fans have grown to love.This piece, though not exhaustive, takes a look at Nigerian celebs who didn’t make it through 2020.

Majek Fashek Legendary reggae superstar, Majekodunmi Fasheke popularly known as Majek Fashek, died in his sleep on 1 June 2020 in New York City . He was 57 and was battling esophageal cancer. Renowned for hits like “Send Down the Rain” and “So Long for Too Long”, tributes poured in from from all over the world for the iconic singer who had contributed immensely to the country’s music landscape. Also known as ‘The Rainmaker’, Majek Fashek was an activist who fought societal ills through his songs including ‘Prisoner of Conscience’, his 1988 album.

Late Victor Olaiya Veteran trumpeter and highlife musician, Victor Olaiya’s music ruled the lips and hearts of many in the 50s and 60s. Frequently referred to as the “evil genius of highlife,” or Dr. Victor Abimbola Olaiya OOON, the “Taxi Driver” and “Baby Mi Da” crooner died in February 2020 following an undisclosed illness while on admission at the Lagos University Teaching Hospital (LUTH) at the age of 89. Olaiya is often credited with contributing to the structure of Nigeria’s music industry, having become one of the country’s first widely successful artists during the 1960s within the genre.

Ibidunni Ighodalo Former beauty queen Ibidunni Ighodalo died of cardiac arrest on June 14, in Port Harcourt, Rivers state, about a month to her 40th birthday. Ibidunni, founder of Ibidunni Ighodalo Foundation and CEO of Elizabeth R. Events had earlier made a touching video clip of herself bidding her husband, Pastor Ituah Ighodalo of Trinity House Church, goodbye before embarking on her trip to Portharcourt from Lagos. Ighodalo was also a successful event planner whose outfit Elizabeth R, had big brands in her clientele. Her foundation has helped couples have children via IVF. News of her death drew many reactions on social media as she became the number one trending topic on Twitter Nigeria.

Dan Foster The veteran media personality died on June 17 after suffering complications from COVID-19, the respiratory disease caused by coronavirus. His death shook the entertainment and media industry and those who knew him personally. Foster worked with numerous radio stations in America before moving to Nigeria in 2000 where he joined Cool FM. Foster left Cool FM in September 2009 for Inspiration FM but left in 2014 to join City FM. In May 2016, Dan Foster left City FM 105.1 to join Classic FM 97.3 radio station where he worked until his death in June 2020.

Foster was a judge on the one-off Idols West Africa series, alongside Nigerian Dede Mabiaku and Ghanaian Abrewa Nana. He was also a judge on Nigeria’s Got Talent alongside actress Kate Henshaw and comedian Yibo Koko.

Pa Kasumu Pa Kasumu Kayode Odumosu, popularly known as Pa Kasumu was fans’ favourite in Yoruba movies, known to dazzle film lovers with his signatory voice and wealth of vocabulary. But his career suffered a setback when he started battling heart failure. He eventually lost the fight to the prolonged illness at 66 on March 1, 2020 Until his death, he featured in several Yoruba hit movies.

Actress Emilia Dike’s is known for movies like ‘Ignorant Couples’, ‘Dust of Yesterday’, ‘Where Money Never Sleep’’ among others. Sadly on May 20, 2020, Okechukwu Oku, a movie director, announced her death. The movie star was said to have passed on after she slumped in Enugu. Her death came as a ride shock to family and friends.

Frank Dallas On February 19, 2020, Frank Dallas, an actor and production manager, died in his hotel room in Umuahia, Abia state where he was attending a summit. Popularly known as “Adedibu” or “Killer” in movie circles, Dallas who hails from Ohafia in Abia State was the former public relations officer of the Actors Guild of Nigeria (AGN), Lagos chapter. Following his demise, the National President of AGN, Mr Emeja Rollas, declared three days of mourning and prayers in honour of the late actor. In a statement signed by the Guild”s PRO, Monalisa Chinda-Coker, the president cancelled all official activities of the guild at all levels for three days.

Chico Ejiro Chico Ejiro Veteran moviemaker Chico Ejiro died in the early hours of Christmas day from a seizure. He had just concluded directing his new movie on Christmas Eve. Born Chico Maziakpono in Isoko, Delta State, Ejiro is a movie director, screenwriter, and producer. Prior to his death, he held the record of the Nollywood director with the highest number of released movies. He had produced and directed over 85 movies in his career in the span of three decades. The filmmaker is the younger brother of veteran filmmaker, Zeb Ejiro. BigLo BigLo Music producer, rapper and singer, Lotanna Udezue aka BigLo, died after a long battle with kidney ailment. BigLo reportedly died on Saturday night, December 26, 2020. Singer, Jazzman Olofin announced his death on Instagram. Biglo shot into limelight in 2004 with the hit song ‘Delicious’ which featured 2shotz. Recall that in 2019, the rapper revealed that he was down with a kidney ailment. He made this known via his Gofundme page where he revealed that he was diagnosed with renal kidney failure back in July 2018.Read more at: https://www.vanguardngr.com/2021/01/gone-but-not-forgotten-nigerian-celebrity-deaths-in-2020/