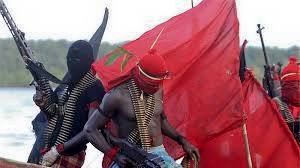 A coalition of militant groups (numbering a total of nine) under the aegis of Reformed Niger Delta Avengers (RNDA) have backed out of supposed peace talks with the Federal Government, accusing President Muhammadu Buhari of not doing well for the Niger Delta and illegally appointing Mr Akwa Okon as Sole Administrator of Niger Delta Development Commission, NDDC.

The peace talks between the RNDA and the Federal Government was initiated, last year, by the Deputy Senate President, Senator Ovie Omo-Agege.

According to a statement by the National Coordinator of RNDA, “Major-General” Johnmark Ezonebi:

“The peace talk was recently threatened by the appointment of Mr Akwa Effiong Okon as sole administrator for NDDC, and the non-recognition of Niger Delta in the policy statements by President Buhari during the January 1 broadcast to the nation.”

The militants threatened that with effect from tomorrow (Wednnesday), their strike force units in the nine states of the zone will kick start bombing and destruction of oil facilities and oil pipelines and major oil ships and vessels coming from Lagos to the creek of Niger Delta

“The major vessels and ships are advised to withdraw their services to Warri, Escravos waters to Bonny NLNG Port Harcourt waters from the Gulf of Guinea to Nigeria waterways, henceforth.

Any of the ships and the vessels that refuse to comply with our directive will be met with the fire power attack from the dreaded strike force units of the RNDA militant groups.

“The operation is code named Operation No Mercy Alfa Piper Zero Oil to save NDDC from the hands of politicians, including the Minister of Niger Delta Affairs, Senator Godswill Akpabio; the sole administrator, Mr. Akwa Effiong Okon, and some presidential aides involved in the plot to hold Niger Delta to ransom.

RNDA, however, commended Senator Ovie Omo Agege over his efforts at rallying round all stakeholders in the zone, including traditional rulers, the leadership of Host Communities of Nigeria and the various agitating militant groups in the zone to build bridge of peace among all ethnic nationalities in the zone.