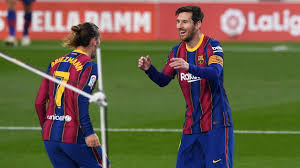 Ronald Koeman starts Messi on bench then brings him on at half-time; Ousmane Dembele, Antoine Greizmann, Pedri also on scoresheet

Barca’s captain was surprisingly left out of the starting line-up by coach Ronald Koeman, whose side were pegged back by the break when Antonio Sanabria cancelled out Ousmane Dembele’s superb opening strike on the stroke of half-time.

But Messi was brought on at the start of the second period and promptly produced a sublime dummy to allow Antoine Griezmann to tap into an unguarded net and put Barca back in front in the 49th minute.

Messi, who had replaced Ansu Fati, then stretched their lead in the 61st minute by dispatching a spot-kick after Aissa Mandi was shown a straight red card – following a VAR review – for using his arm to block a shot from Dembele.

Betis set up a tense final 15 minutes when Loren slotted home from 10 yards, but Messi wrapped things up in the 82nd minute after a one-two with Sergi Roberto.

The playmaker was denied his hat-trick by an offside flag before midfielder Pedri added a fifth in stoppage time – the teenager’s first goal in La Liga.

We’ ve Everything To Enhance Nation’s IGR Through Tourism – Sanwo-Olu.