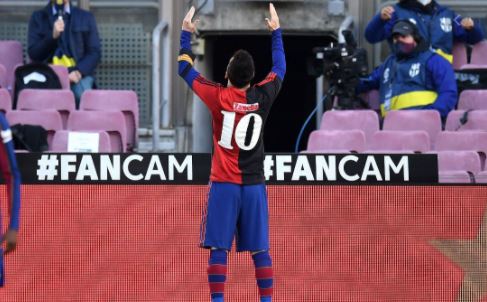 Barcelona returned to winning ways in La Liga with a 4-0 win over Osasuna at Camp Nou on Sunday as Lionel Messi paid tribute to Diego Maradona with a brilliant second-half goal.

Martin Braithwaite, making his first start in the league this season, opened the scoring from close range and Antoine Griezmann added the second before half-time with a stunning volley from the edge of the box.

Philippe Coutinho scored the third after the break when he was teed up by Griezmann before Messi completed the rout for Ronald Koeman’s men. Messi lashed home from 20 yards before revealing a Newell’s Old Boys shirt in tribute to Maradona, the former Argentina, Napoli and Barca forward who died Wednesday.