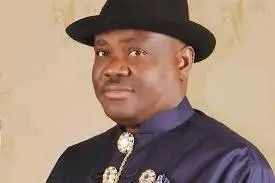 Rivers State governor,
Nyesom Wike, has
opened up on how his
political career was
salvaged by the magnanimity
of Justice Mary Odili to remain grateful to Justice Mary
Odili for her timely intervention that saved his political career in 2004.
Governor Wike made this
disclosure at the 70th birthday
and retirement thanksgiving
mass of Justice Mary Odili as
Justice of the Supreme Court
held at Our Lady of the Holy
Rosary Chaplaincy, Catholic Institute of West Africa, (CIWA)
in Port Harcourt on Sunday.

The Rivers State governor
recalled how he cried to Justice
Mary Odili when he got hint
that his name was not included
among those cleared to contest
either as first term or second
term chairmen of local councils in the state.

According to governor
Wike, Justice Mary Odili listened to him, and took the complaint to her husband, Dr Peter
Odili, who was the governor of
Rivers State then.

Governor Wike explained
that the manner Justice Mary
Odili presented the matter got
her husband acting on it immediately.
He said, first, Dr. Peter Odili invited the then Rivers State
Peoples Democratic Party
chairman, Uche Secondus, to
confirm the observation and
thereafter put a call across to
the then national secretary of
the PDP, Chief Vincent Ogbulafor.
“In 2004, at that time the husband was the governor, so she
was going to Bori Camp for the
women empowerment scheme.
I was to run for a second tenure
as chairman of my local government (Obio-Akpor).

“Now, they were having
lunch with her husband and
the former State party chairman, Prince Uche Secondus.
And, I was told that my name
had been removed from the list.
So, I ran down to Government
House.
“She had finished her own
lunch, left her husband and
was entering the vehicle. I
said mummy I’m finished. She
asked what happened, I said
they’ve removed my name.
“She ran back straight to her
husband and informed him.

Her husband asked who removed his name. At that time,
Secondus had left. The husband then called the security at
the gate, they stopped Secondus
and asked him to co