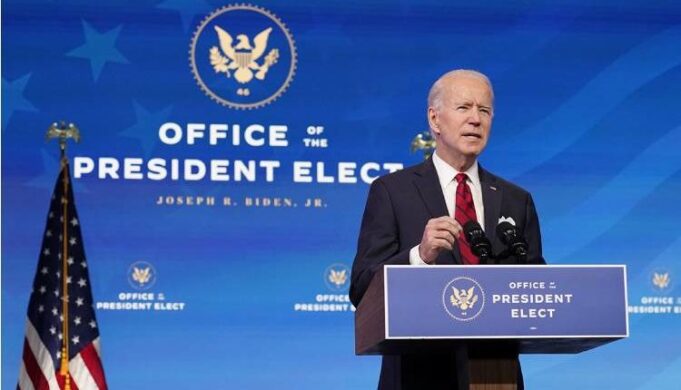 President-elect Joe Biden is planning to sign dozens of executive orders including rejoining the Paris climate accord and ending the travel ban on predominantly Muslim countries, on his first day in office.

Joe Biden also plans to sign orders halting evictions and extend limits on student loan payments during the coronavirus pandemic and issuing a mask mandate on all federal property and interstate travel.

Incoming White House Chief of Staff Ron Klain outlined the flurry of activity for Biden’s first 10 days in office in a memo to senior staff on Saturday.

On Biden’s second day in office, he will sign executive actions focused on addressing the Covid-19 pandemic, including ways to help schools and business reopen safely, expand testing, protect workers and establish clearer public health standards. The next day, Biden will direct his Cabinet to work on delivering economic relief to families most affected by the crisis.

The plan would offer a pathway to citizenship for the millions of undocumented immigrations currently in the United States.

The memo makes clear a key part of Biden’s overall strategy includes getting Congress to act on his legislative priorities, something Joe Biden ran on by highlighting his relationships with Republicans in the Senate.

The day after Biden is inaugurated, according to Mr. Klain, he will “sign a number of executive actions to move aggressively to change the course of the COVID-19 crisis and safely re-open schools and businesses, including by taking action to mitigate spread through expanding testing, protecting workers, and establishing clear public health standards.”

And on January 22, Joe Biden will direct his Cabinet agencies to “take immediate action to deliver economic relief to working families bearing the brunt of this crisis,”

For climate change activists, Biden’s promise to take swift action on an array of climate issues was a key part of why progressives rallied around Biden once he cleared the Democratic field, said Jared Leopold, co-founder of Evergreen Action.

“Taking over the presidency from Donald Trump is like taking over the lease from a frat house: The cleanup task list is staggering,” Leopold said. “The task for Biden is two-fold: first, clean up Trump’s damage, then take action on the bold climate plan that science demands.