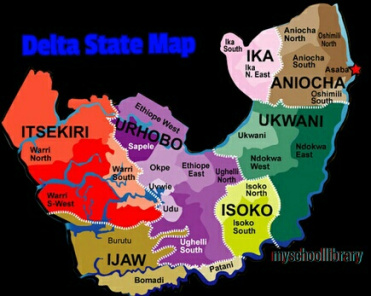 Ravaging flood has submerged over 25 Isoko and Ndokwa communities, Delta State, displacing thousands of persons. The flood which resulted from days of torrential rain fall was aggravated by the surging water level, as the River Niger and adjourning streams over flowed their banks, overrunning the communities.

Farmlands and household properties have been destroyed, as schools, places of worship and the entire premises of the Ndokwa East Local Government council secretariat, were not spared by the natural disaster.

A former community leader in Igbide, Mr. Alex Ovie, appealed to the government and other public spirited individuals “to urgently intervene in order to avoid regrettable human casualties.” Reacting to the development, Chairman of Ndokwa East Local Government Area, Mr. Juan Governor lamented that “about 90 percent of our communities have been taken over by the ravaging flood while almost 100 percent of our community’s access roads have been cut off as well.

“In most communities along the Ase River and the Niger, it is a total displacement as all farmlands have been flooded. Even Ashaka is now an Island as all roads leading into Ashaka has been cut off by the flood. The situation is actually relatively close to what happened in 2012.

‘We wish to once again give all of us an unreserved assurance that the Federal, State, Local Government and all Government agencies are working in collaboration with partners and are doing everything possible to help our people stay safe as we advise everyone to remain calm. “As a responsible government, this LGA administration cares about the safety of the lives and property of our people and would not want them to suffer avoidable losses.”

Fashion Is A Way Of Life ― Onyeuka Sophia