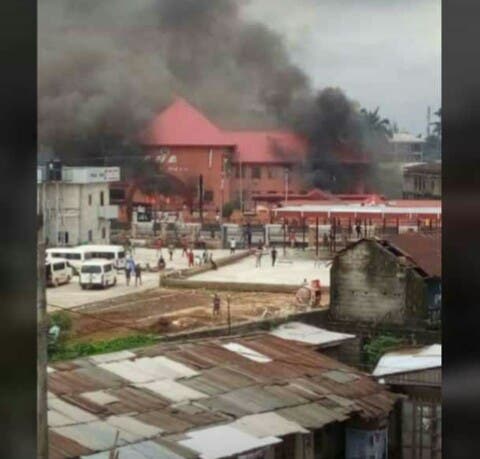 The officials of the Nigeria Security and Civil Defense Corps, NSCDC, guard the secretariat, had fled before the arrival of the protesters.

They also attacked three first generation bank as well as a mall at Etche road area of the city.

The protesters had yesterday, razed the Dragons Squad police station and killed two policemen at the facility.

They had earlier attacked the Eziama police station along Aba- Ikot Ekpene road. Following the development, Gov. Okezie Ikpeazu imposed 24 hours and approved 5 million cash reward to anyone who provides information leading to the arrest of the hoodlums.

The protesters defied the curfew marching through Asa- Aba main Motor Park from where they broke into the gate of the Aba town hall and set it on fire.

Even several police roadblocks mounted around major roads in the city, and backed by soldiers, could not stop the protesters from touching public buildings.

The traffic police control post in most areas of the city were destroyed.

A resident of Aba, who who spoke with newsmen said; “ The level of destruction of public buildings by the protesters is shocking.

We all demanded that SARS must be scrapped and the government complied with it and promised to look into other demands. Why attack banks?