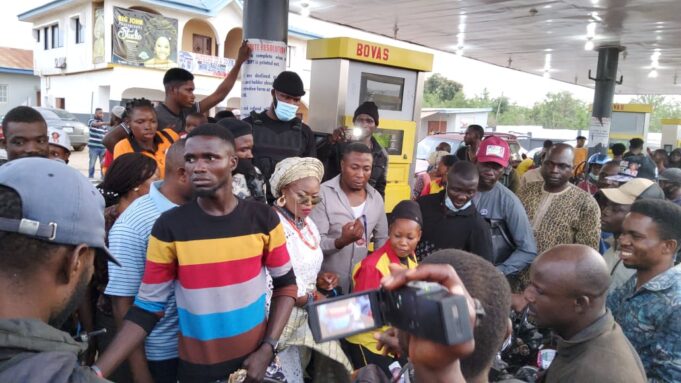 In a bid to ease the difficulty faced by motorists in the filling stations, the ADP governorship candidate, Erelu Kemi Elebute-Halle, gave free fuel to motorcyclists.

The gesture was made at BOVAS filling station, Ureje, Ado-Ekiti, the state capital.

While speaking, the governorship candidate said she’s pained by the high cost of PMS and its resultant effects on transportation, goods and services, hence her desire to contribute her quota in easing the difficulty.

Engr, Mrs Kemi Elebute-Halle appealed to Federal Government to, as a matter of urgency find a lasting solution to the suffering of the people. She urged Ekiti people to vote for credible alternative in the forthcoming Ekiti State gubernatorial election for the betterment of their dear state.

The elated beneficiaries who could not hide their joy, thanked the governorship candidate for identifying with them at this critical time.

Some of them who spoke to newsmen lamented the high cost of pump price and the difficulty they usually experience in getting it, they said the gesture of the ADP governorship candidate is a great relief.