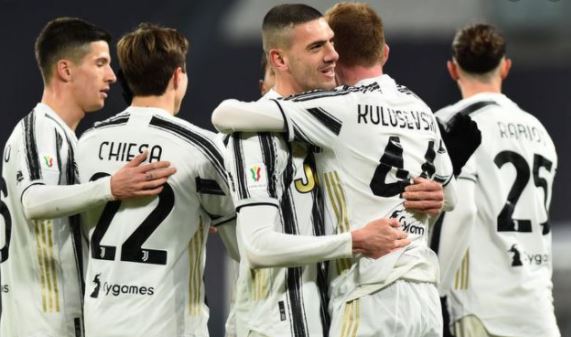 A youthful Juventus side crushed SPAL 4-0 on Wednesday to set up a Coppa Italia semi-final against Inter Milan after 10-man Atalanta booked a place in the last four by beating Lazio in a Bergamo thriller.

Alvaro Morata’s penalty gave the Italian champions an early lead in Turin, and 21-year-old wing-back Gianluca Frabotta doubled their advantage before halftime by rifling a shot into the bottom corner, his first goal for the club.

Dejan Kulusevski added a third with a composed finish after 78 minutes and Federico Chiesa’s stoppage-time tap-in completed the rout against the second-tier visitors.

But Juve faced little resistance as they ran out comfortable winners against a SPAL side that is fifth in Serie B, and they will now face Antonio Conte’s Inter over two legs for a place in the final.

In Bergamo, Atalanta eliminated Lazio despite spending most of the second half with 10 men, setting up a semi-final against the winner of Thursday’s clash between Napoli and Spezia

Berat Djimsiti gave the hosts an early lead before Lazio struck back through Vedat Muriqi and Francesco Acerbi, but Ruslan Malinovskyi fired in an equaliser for the hosts towards the end of a pulsating first half.

Atalanta defender Jose Luis Palomino was sent off for a last-man challenge in the 54th minute, but the home side responded superbly as Aleksey Miranchuk put them ahead three minutes later.

Gian Piero Gasperini’s side could have made it four from the penalty spot but Duvan Zapata’s effort was saved by Jose Reina, and Lazio were left frustrated as they threw numbers forward in search of an equaliser.