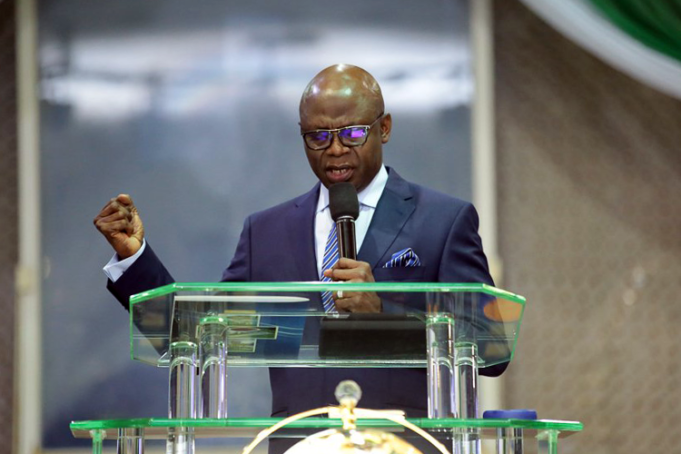 Pastor Tunde Bakare, former vice presidential candidate and serving overseer of the Citadel Global Community Church (GCC), has dispelled reports credited to him that he Presi­dent Muhammadu Buhari as president in 2023.

He said: “I’ve realised that the Nigerian press, some­times for the sake of their sale, use headlines that, when you read the entire story, you will be wondering, ‘what has this title got to do with this?’

“I can’t stop the press from doing whatever they will with what I said, but I will say to you that there is a difference between ambition and a vision that is clear to you. The com­panion of ambition is anxiety.

“You’ve been trying to scheme to make it happen, you pursue it and so on, but if it is a clear vision from heaven and it is clear in your spirit, it’s a question of time.

“Whoever is going to deal with God must have to be patient. The vision upon my head, like Daniel will say, I saw in 1967.

“It is not today. Go and interview some of my class­mates in secondary school, they will tell you that I shared it with them.

“Speak to my wife also. Be­fore I proposed to her, I spoke about it also.

“Ask Pastor E.A. Adeboye in 1984, when I became a part of his church, I spoke with him about where my journey is going.

“That was probably one of the reasons he encouraged me to step in when President Bu­hari asked me to be his run­ning mate. I don’t want you to continue asking people.”

Bakare, who said he does not belong to any political par­ty at the moment, said howev­er he had a significant role to play in the emergence of the 16th president of Nigeria in 2023.

“My destiny is intertwined with that of Nigeria. By the grace of God, I have a role to play.

“When I wrote the book on my mum titled, ‘The Woman Who Saw the Future’, page 85 of that book says: ‘By the time the 16th president will come into manifestation, I have a significant role to play and it is a role of destiny. I shared it with Mr. President himself.

“There is no place where the president and I sat down and said, ‘Oh, you will succeed me in 2023’.

“And I’ve not openly, any­where, joined a political par­ty and say this is the political party I’m going to use; neither have I put any structure in place.

“But I do know this, if God said to Samuel, to the House of Jesse, anoint one of his sons, I have provided myself a king in his house, King Saul can do whatever he wants to do, God has already said good­bye.

“All the Adonijahs of this world can have war chests and buy chariots to become the next king after David, if it belongs to Solomon, they may not invite him to their party.

“They will hail Adonijah and say ‘Hail King Adonijah’ before he will know that Sol­omon is the preferred choice.

“If it’s true or false, it’s a question of time. Be patient! These things will come into manifestations in the days to come.

“I believe very strongly that God is raising me to shep­herd this nation just as I have shepherded the church.

“In Psalms 78 verses 70-72, he took David from follow­ing the ewes, little sheep, to come and shepherd Israel as a nation, and he shepherded Israel with the integrity of his heart and the skillfulness of his hands.

“I can’t wait to step into the fray, add my own quota alongside other people, men and women of goodwill who want Nigeria to stop being a potentially great nation, to work for that great nation to manifest. Responsibility is a price of greatness and if we are responsible, we should think deep alongside others and create a blueprint that will transform Nigeria.”

While clarifying his state­ment on Joe Biden’s emer­gence, Bakare said he was merely emphasising the fact that nobody should be written off in a contest.

According to him, “I said, look at Joe Biden. Everyone more or less, wrote him off.

“They called him Sleepy Joe. They said he even made a blunder choosing a black lady (Kamala Harris) who joined lesbians together as husband and wife as his running mate. So, Biden had lost that elec­tion before it happened.

“Many churches also stood by Donald Trump saying he will win a second term.

“Joe Biden looked harm­less but he won the election. Go and investigate, the bulk of the voters are young people.

“God will raise young princes of this nation who will do what is right very soon. That is the context in which I narrated what I said.

“I have no relationship with Joe Biden or with Don­ald Trump, but we know that whatever happens in America can have a domino effect on the entire world.

“So, if Joe Biden who no­body thought could muster any serious support ended up with the number of mil­lions of votes he got, then we have to be careful in writing people off.

“Although Biden had unique experience, not only as a senator but also as a for­mer vice president for eight years and he has attempted these thrice, he lost the pri­mary twice.

“When the time comes, he has it. President Buhari tried three different times until he got it the fourth time.”

Also, speaking on restruc­turing, Bakare who advocated geo-economic restructuring with emphasis on devolution of powers said the APC-led Federal Government owes Nigerians explanation why it has failed to implement the report of APC Committee on True Federalism headed by Governor Nasir El-Rufai.

“Well, they have done something on restructuring but not as much as one would have expected. But you cannot say they’ve not done anything because under the leadership of President Muhammadu Buhari, the Nasir El-Rufai committee was formed to look into the issue of true federal­ism and restructuring.

“They made fantastic, for­midable recommendations to the government and to APC. Why the government has not implemented it and what is hindering them, they will have the questions to answer in the days to come. But they still have the oppor­tunity within the next one or two years because there is no army that is as powerful as an idea whose time has come.

“I’m emphasising geo-eco­nomic restructuring so that we don’t put the cart before the horse. Let us begin with the devolution of powers. Let us make the centre less attrac­tive, not weak, strong state and strong centre. And states that have commonalities in culture, ethnicity, language and proximity can come to­gether and form geo-political zones without disrupting the structure. But let them put their resources together to develop their own area.

“Nigeria needs redemption right now and we are praying to God so that it can be prop­erly restructured and it can be better than it ever was in our trajectory”, he said.