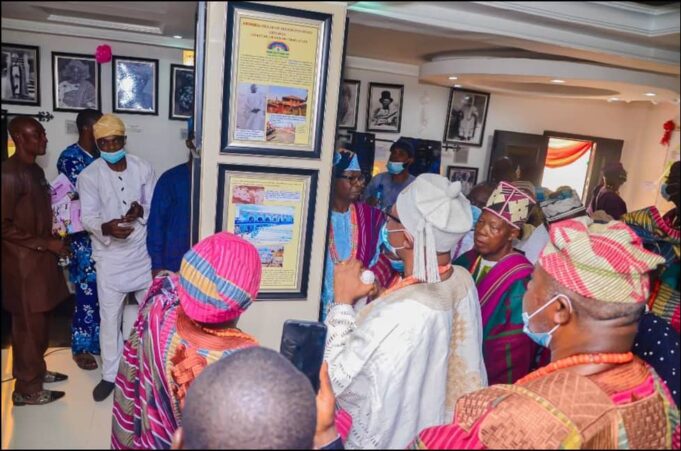 The Awosikas of Ondo City have turned the family’s 160-year-old building into a museum and hall of fame.

The Awosika Museum and Hall of Fame located at Number 2, Odotu Street, Ondo, was officially inaugurated in Ondo City on December 11 this year.

According to statement made available to journalists by the Awosika family, “The house, located at the round-about in Odotu Street Ondo, was the main Awosika family house where the first Awosika High Chief, Sasere Ayotilerewa Awosika, lived with his wives and children, until his death on April 9, 1909, at the age of 90 years.

“As recorded in the Book of Families in the Library of Congress of the United States of America, the Awosika family from Ondo City, Nigeria, is one of the largest families in Nigeria and Africa.

“The building has been in existence for a very long time, at least 160 years ago as at 2019 (Carbon 14 dating). This “Listed Building” originally built with mud has been structurally restored.

“The restoration from donations by Awosika family members and friends all over the world, was professionally executed to ensure stability of the aged building while keeping the spaces intact, as well as providing modern lighting, ventilation, conveniences, and ventilation,’’ it said.

The statement added that the mosque built for the Muslim community in Odotu area by the Awosika family between 1890 and 1910, was also restored.

It said that the museum is composed of the Awosika Gallery, the Awosika Hall of Fame, Ekimogun Gallery, Chief Victor Oloyede Awosika Exhibition Hall and the Awosika Mausoleum.

The Osemawe and Paramount Ruler of Ondo, Dr. Victor Adesimbo Kiladejo, Jillo III CFR, thanked the Awosika family for restoring the old house, adding that it would enhance tourism in the area.

Kiladejo used the opportunity to call on other families in the community to emulate the Awosika family, especially with the reconstruction of the old and historical Odotu Lane (Liwanja Street) with interlocking stones to beautify the adjacent areas.

Chairman of the Museum Board of Trustees Chief Benson Awosika, said that the museum had been registered with the Corporate Affairs Commission (CAC) as a non-profit organisation that would be open to the public free of charge.

Also speaking, Secretary of the Museum’s Board of Trustees, Prof. Larry Awosika, thanked His Imperial Majesty the Osemawe and Paramount Ruler of Ondo, and other attendees for witnessing the ceremony.

Awosika enjoined the public and those in the Diaspora to feel free to visit the museum daily from Monday to Saturday, from 10:00am to 5:00pm.

The inauguration of the museum also provided an opportunity for the induction of 12 dead and one living members of the Awosika family into the Hall of Fame, for their contribution to the progress of Ondo, the Awosika family and Nigeria.

The ceremony was attended by the Osemawe of Ondo, his high chiefs and chiefs, dignitaries, Awosika family friends from Abuja, Kaduna, Lagos, United States of America, London, and Germany.