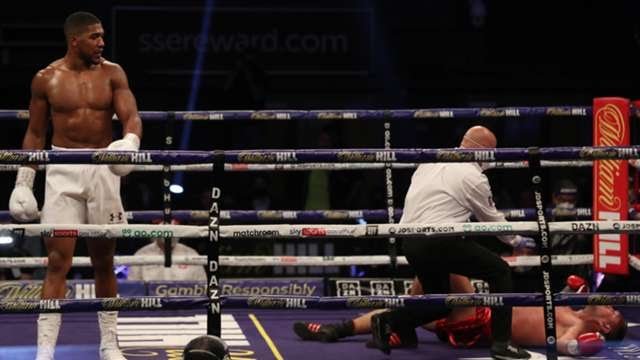 Anthony Joshua has forced his challenger, Bulgaria’s Kubrat Pulev, to lick the canvass by smashing via a knockout in the ninth round to retain his three world heavyweight championship belts — after a year away in a title defence.

Joshua regained the WBA, WBO and IBF titles in a rematch against Andy Ruiz Jr. last December in Saudi Arabia, after being stopped by the Mexican-American in an upset at Madison Square Garden that summer.

Joshua, born to Nigerian parents, beat the Bulgarian at the Wembley stadium on Sunday morning, to hand Pulev his second defeat in his professional boxing career.

The first round saw both pugilists with lots of single punches, while none of them really managed to get anything special in, but Joshua had the snappier jab.

Although the Bulgarian came out for the third round more active than he was in the first two rounds, Joshua landed a one-two for the first meaningful shot of the round, going further to land uppercut after uppercut to complement his overhand rights and Pulev was left barely able to survive.

Joshua secured his 22nd knock-out against Pulev, bringing his bout records to 24-1, 22 KOs.

The 31-year-old uppercut was the story of this bout, because he worked the body and the head with jabs, but when the opportunity presented itself, Joshua destroyed Pulev – an amazingly tough man – with an uppercut to floor the Bulgarian in the 9th round.

Joshua landed a right hand flush on Pulev’s chin to win it, but the Bulgarian was barely in the room, having just got up from the first knockdown in the ninth.

The world heavyweight champion put on a show at the Wembley Arena in London against the experienced Bulgarian to set up his clash with Tyson Fury in 2021.

Said Joshua after the bout: “Less talk, more action. I hope everyone was satisfied tonight. For me, I stuck to what I know best, boxing. You ask the crowd what they want to see!”.

Added he: “I’ve been chasing the belts since I started this. It’s not about the man, it’s about the belt and the legacy. If it’s Tyson Fury with the WBC belt, then let it be Tyson Fury!”