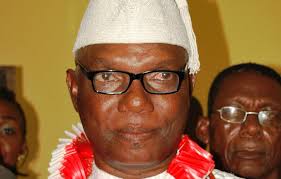 Speaking during the burial ceremony, which witnessed the presence of prominent personalities across Nigeria and beyond in Adagbrassa Elume in Sapele Local Government Area of Delta State, Anirah described his late mother “as a great blessing to them and the society.

“We are going to miss her motherly care, because she was there for us all through her lifetime,” he said.

Okowa, who was represented by Fidelis Tilije, the Commissioner for Finance, Delta State, said that “Anirah lived a life as a responsible mother, worthy of emulation by all her children, grand-children and other residents of the state.”

Tilije extolling Mama’s Christian life, admonished women of this generation to uphold Christian values to build a decent society for generations yet unborn and finally prayed for the repose of her soul in the Lord’s bosom.

Also, Oborevwori said that Anirah was a woman with a large heart and who acted as a mother of all.
Eulogising the unique qualities that the late Anirah possessed, the Speaker said: “She was very kind, accommodating and carried everybody along in all that she did.”

The Speaker, His Deputy, Majority Leader, the entire Delta State House of Assembly members and their wives were all present.

Austin Avuru, former MD of Seplat, Prof Sam Oyobaire (Former Minister Of Information) and a legion of Professors were present.

Seplat Energy Plc led by the Base Manager and management staffs..

The management and students of the school of Deaf & Dumb.
and others too numerous to mention.