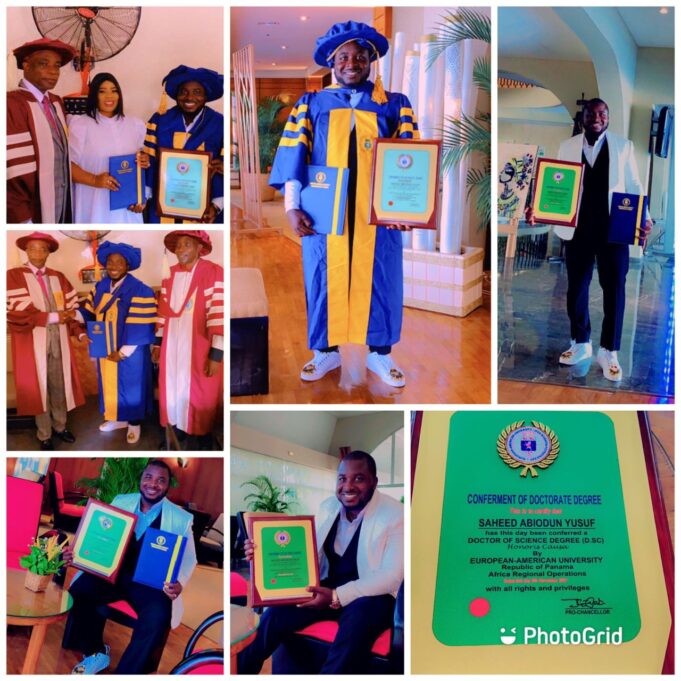 Amb. Saheed Abiodun Yusuf was born on 18th of August 1980, to the family of Yusuf Alaraba originated from Abeokuta, Ogun State Nigeria. He was born and brought up in Lagos. Young Saheed attended Ageke Primary School Ejigbo and obtained his First School Leaving Certificate. He proceeded to Ejigbo Senior High School, Ejigbo Lagos State, where he obtained his West African School Certificate.

As a smart and intelligent kid who had a dream to grow fast and big in life, he quickly joined a clearing and forwarding company where he learnt about shipping and clearing of importations. He later proceeded to the University of Lagos where he studied Business Administration.

Over the years Saheed has sharpened his professional antenna by attending several professional courses on business and marketing; these and more has given him deep and insightful knowledge in sales and marketing. Amb. Saheed Yusuf has had a wonderful working career with different companies before becoming the Chief Executive Officer of Gemstone Homes & Property, and Chairman Gemstone Autos where he operates his Cars business and Real Estates Development.

Amb. Saheed Yusuf is a religious and generous man who partakes in many religious organisations and societies, both Islamic and Christianity. Saheed was not born with a Silver Spoon; rather he struggled through tough and rough times knowing the sharp difference between hardship and opulence. Owing to his humble background he has always believed that no matter your situation in life there is no limit to what one can achieve so long as he is determined and consistent. This made him to quickly start out in life by doing different petty businesses of buying and selling.

Amb. Saheed Yusuf has impacted as much lives as possible and gives back to the society. His contributions and philanthropic activities have not gone unnoticed as many organisations have honoured him with several awards namely: ECOWAS Youth Council Award of Nelson Mandela Leadership of Excellence and Integrity as ECOWAS Youth Ambassador; The Most Distinguished Fellow 2021 Hall of Fame by the Chartered Institute of Public Resources Management & Politics Ghana; Award of Honour as an Ambassador by the National Youth Council of Nigeria (NYCN); National Outstanding Leadership Award as Global Peace Ambassador by the Youth Advancement Initiative of Nigeria. Others are: 2021 African Youth Parliament Honorary Leadership Award by the African Youth Parliament; Service to the Nation Award as an Epitome of Societal Development by the National Association of Nigerian Students (NANS); National Outstanding Leadership Award by the Coalition of Nigeria Youth on Security and Safety Affairs; Obafemi Awolowo Exemplary Leadership Award Series for Integrity and Excellence as Youth Ambassador/Nigeria Youth Icon of Hope for the year 2021 by the Youth Assembly of Nigeria (YAN), among many more.

His perseverance and commitment to making life conducive and comfortable for people around him has described him as a beacon of light that shines indiscriminately. Amb. Saheed Yusuf is a silent Achiever, a leader with a heart full of human kindness who derives great joy and satisfaction in making others happy. Yusuf has been a motivation and a role model for many Nigerian youths and make them believe in being legitimate by dint of hardwork, integrity, persistence and demonstrable diligence he had maintained, a steady and unbroken career record and ascendancy spanning over many years.

Despite his great and selfless philanthropy, Amb Yusuf remained calm, unassuming and humble to the core. Humanity is his greatest interest and aspiration which has always nursed in his heart as he empathizes and put people ‘ comfort in his consciousness. Amb Sheed Yusf who enjoys playing Golf, brainstorming and holding intellectual discussions is happily married and blessed. with children.

The Senate and Award Committee of European-American University having satisfied with Amb Saheed Abiodun Yusuf’s impressive tract records of achievement and contributions to society hereby Confered on him on 6th November, 2021 the Honorary Award of Doctor of Science (Hon. D.Sc) in Automobile Dealership & Real Estates Development, Honoris Causa with all the rights and privileges of the university.