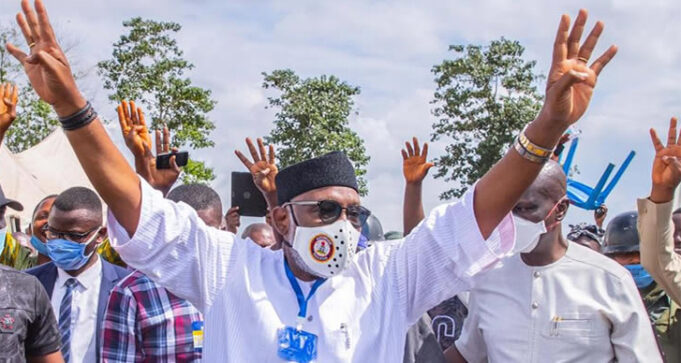 Arakunrin Rotimi Akeredo­lu, Ondo State governor and candidate of the All Progres­sives Congress (APC) in the October 10 gubernatorial election in the state, has at­tributed his victory to hard work, determination, focus and dedication.

The governor, who spoke at his Owo country home residence shortly after he was declared winner of the election by the Independent National Electoral Commis­sion (INEC), added that his victory was a challenge to his administration by the electorate for rededication to service in their interest.

He promised not to relent in making the people the cen­tre of his administration.

While addressing mem­bers of the All Progressives Congress National Campaign Council led by Lagos gover­nor, Babajide Sanwo-Olu, who were at his residence when the results were an­nounced, Akeredolu said the renewal of his mandate was an eloquent testimony to the degree of acceptance by the people and affirmed that the confidence reposed in his administration remained un­shaken.

Other APC leaders present at his residence were former Ogun governor, Ibikunle Amosun; Osun Governor Gboyega Oyetola and their Kogi counterpart, Yahaya Bello, amongst others.

Residents of Owo, the hometown of the governor, also trooped to his residence with drums and bands to celebrate the victory, shout­ing ‘Ibi Giga’ (Higher Place); 4+4=8; Aketi Leekan Si (Ake­ti One More Time); Akedati­wa, amongst others.

Overjoyed Akeredolu noted that his victory was a statement on the people’s assessment of his perfor­mance in the last three and half years.

According to him: “It is unequivocal, direct, inspir­ing and soul lifting. It is awe­some. It is a reward for hard work, dedication, focus, hon­esty and patriotism. It is also a challenge to us for rededica­tion to service in the interest of our people. On this, we shall not relent.

“The resounding victory of our great party, the All Pro­gressives Congress (APC), throws an open challenge to all stakeholders not to choose the path of complacency.

“We have noted the few dissenting voices of pro­test in this referendum. We heard them loud and clear. We intend to address gen­uine grievances. We shall continue to focus on the de­velopment of our God-given space, the Sunshine State.

“This administration will not be distracted in the dis­charge of our sacred man­date. The people will contin­ue to be at the centre of all decisions

“We will proceed with our administrative style which promotes transparency and accountability. We are deter­mined to set our state, pro­gressively, on the path of real development. Self-reliance is attainable.

“Our state has no busi­ness with poverty. Sincere, purposeful and focused leadership should have little difficulty in harnessing the vast resources, both human and natural. We will put in everything to justify the trust reposed in us.”

Governor Akeredolu par­ticularly congratulated the candidate of the Peoples Democratic Party (PDP), Ey­itayo Jegede, for participat­ing in the election, adding that Eyitayo’s patriotism was not in doubt.

He also commended the electoral umpire, INEC, for conducting what he said was a free, fair and credible election.

Akeredolu, who won 15 of the 18 local government areas, polled 292,830 votes as against Jegede who garnered 195,791 votes. Agboola Ajayi, candidate of the Zenith La­bour Party (ZLP) and deputy governor of the state, came a distant third with 69,217 votes.

Announcing the result at the INEC headquarters in Akure, Prof. Idowu Olayinka, the returning officer of the election, said Akeredolu met all the conditions required to be declared the winner.

“Having satisfied the re­quirement of the law and scored the highest number of votes, I hereby declare Olu­warotimi Odunayo Akeredo­lu of the APC as the winner, and he is hereby returned elected,” Olayinka said.

Donald Ojogo, the state’s Commissioner for Informa­tion, who was the head of the media team of Akeredolu’s campaign, said the people of the state deserve praise for believing in the governor and rejecting the propaganda of the opposition that were hell-bent on reversing the achievements recorded by the administration in the last four years.

“We thank the good people of Ondo State for making this a reality. Without them, this couldn’t have been possible”, he said.

President Muhammadu Buhari in his congratulatory message charged the gover­nor to prove to residents that their trust in him had not been misplaced by perform­ing better than he did in first term.

The president, in a state­ment by his Special Adviser on Media and Publicity, Mr. Femi Adesina, also com­mended Ondo voters for displaying maturity by con­ducting themselves peaceful­ly during the election, noting that their conduct had posi­tively rubbed off on the na­tion’s diplomatic image.

He also commended INEC and the security agencies for their positive roles in mak­ing the election smooth and peaceful.

“President Muhamma­du Buhari rejoices with Rotimi Akeredolu (SAN) on his re-election as governor of Ondo State for another four-year term. The presi­dent lauds the resounding victory of the governor at the election held on Satur­day, October 10, 2020, noting that the votes garnered ‘show that one good turn surely de­serves another’.

“He thanks the people of Ondo State for keeping faith with their governor, and the All Progressives Congress (APC), noting that ‘the people know the person and party that truly serves them, and have spoken in clear voice and unmistakable terms’”.

Also Kayode Fayemi, governor of Ekiti State and Chairman, Nigeria Gover­nors’ Forum, in a statement described Akeredolu’s re­election as a victory for the people of Ondo.

“With God’s blessing, hard work, laser beam focus, prop­er planning, unity and sincer­ity of purpose, elections are always winnable. Congratu­lations, my brother. This is a victory for the people. A vic­tory for democracy,” Fayemi wrote.

The ruling APC has de­scribed Akeredolu’s reelec­tion as a vote for good gov­ernance, industrialisation, security, empowerment and general welfare of the state.

It said Akeredolu’s re­election was a testament to the inclusiveness, genuine reconciliation and peace the Governor Mai Mala Buni-led APC Caretaker Committee has ensured among party ranks in Ondo and the party in general.

A statement by the party’s Deputy National Publicity Secretary, Yekini Nabena, in Abuja, on Sunday, thanked Ondo residents for coming out en masse to vote for its candidate.

“As a party, while we thank the Ondo electorate for voting for good governance, indus­trialisation, security, empow­erment and general welfare of the state, we will continue to advocate and support safe, free and credible elections that guarantee that valid votes count and the people’s will prevail.”

Sanwo-Olu, who is the chairman of the All Pro­gressives Congress (APC) National Campaign Council for Ondo State Governorship Election, said Akeredolu’s success in the election is a validation of people’s accep­tance of his administration, having impacted positively in their lives during his first term in office.

Speaking at Akeredolu’s residence in Owo on Sun­day shortly after INEC de­clared Governor Akeredo­lu and his running mate, Hon. Lucky Aiyedatiwa, as governor-elect and deputy governor-elect, respectively, Sanwo-Olu said the people of Ondo State deserve com­mendation for coming out in large numbers to perform their civic responsibility and for defying all odds to vote for APC-led administration in the state.

He said Akeredolu’s vic­tory is a clear manifestation that the APC remains the party of choice for Nigerians, stressing that the party will continue to work in the best interest of Nigerians.

He said: “I must congrat­ulate my brother, Governor Akeredolu, for being victo­rious in last Saturday’s elec­tion. His victory across the state is a confirmation of the trust and belief of the people in the APC led administra­tion in Ondo State, having benefitted immensely from the various people oriented programmes of his adminis­tration.”

President of the Senate, Ahmad Lawan, has congrat­ulated Akeredolu on his re­election for a second term.

Lawan also congratulat­ed the APC on the victory of its candidate at the election, saying the triumph is well-de­served and heartwarming.

Lawan, in a statement by his Special Adviser (Media), Ola Awoniyi, noted that the election was a referendum on the stewardship of Governor Akeredolu in the last four years and that the governor has passed the examination in flying colours.

The Senate President commended the people of Ondo State for their peaceful conduct at the poll, which, he said has demonstrated their confidence in their country’s democratic process.