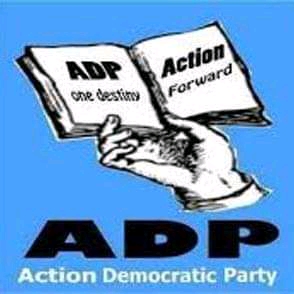 Worried by the recent terror attack on Abuja-Kaduna train passengers in which about 10 lives were lost, with scores sustaining various degrees of injuries, the Action Democratic Party (ADP) has advocated the pressing requirements for the reinvention of the nation’s security architecture by way of boosting the obvious shortage of manpower in the security agencies.

Speaking during a press conference held in Lagos on Thursday, National Chairman of the ADP, Yabagi Yusuf Sani, said: We have stridently called for drastic, radical measures to redress the challenge of paucity of sophisticated modern armament and gadgets in the arsenal of the nation’s Armed Forces. We have also severally suggested honest commitment to the crucial issue of boosting the morale of members of the security agencies by enhancing their welfare and conditions of service.

“But, a patently impervious APC government will not listen because, the party and the key individuals driving the levers of the government under its grip, are too inured by pride and impunity resulting from the dizzying elixir of power.

“The APC government in the last seven years has been steadily piloting the ship of the nation aground because its chieftains are more disposed to the allure of egregious corruption and rapacious kleptomania.”

Sani stated that the terrorists attack on the “Abuja-Kaduna train is a similar manifestation of the decadence and abysmal level of degeneration in the nation’s security architecture, just as it shows that, those who are supposedly keeping watch over us, are in deep slumber,”

While condemning the attack, Sani said: “We in the Action Democratic Party (ADP) were rudely jolted as most Nigerians were, with the blood-chilling news of the bombing, killings, kidnapping and robbery by a murderous band of marauding terrorists on an Abuja-Kaduna bound train last Monday, 28th March, 2022.”

The ADP helmsman, while sympathizing with victims of the attack, said: “The leadership and entire members of the Action Democratic Party, ADP, wish to express their heartfelt condolences to all those who lost their loved ones in the catastrophe as we pray that God Almighty will grant the souls of the deceased a Rest in Peace in the hereafter.

“We commiserate with, and wish those who sustained injuries, very quick recovery and also full of prayers for the safety and early reprieve for all those taken away.”

Finally, Sani said: “The Action Democratic Party is demanding that in the meantime, no stone should remain unturned in the efforts to rescue the hapless victims taken away as hostages by the satanic and monstrous agents of darkness.

“Contrary to the unconscionable, shocking and reckless call by Amaechi that members of the public should make donations towards the treatment of the wounded on hospital admission, the ADP is insisting that the Federal Government must be fully and comprehensively responsible for all the medical bills of the victims.

“The ADP is further calling on the Buhari administration to own up to its failings and ineptitude by paying full compensation to families of those who lost their lives as well as, for the valuables lost by victims to the marauders.

“Very importantly, the Action Democratic Party is calling on President Muhammadu Buhari to for once, demonstrate dynamic leadership, care and sensitivity to the feelings of citizens by ensuring that heads are made to roll. Those that must be held accountable include, the security Chiefs, who have manifested gross incompetence, lack of vision, diligence and dereliction of duty and the Minister of Transportation whose incapacities have severally manifested in the different departments under his purview. Of course, these people., should be made to face the music if, as it would have been the case in civilized climes, they lack on their own, the honour and nobility of mind to do the needful.”