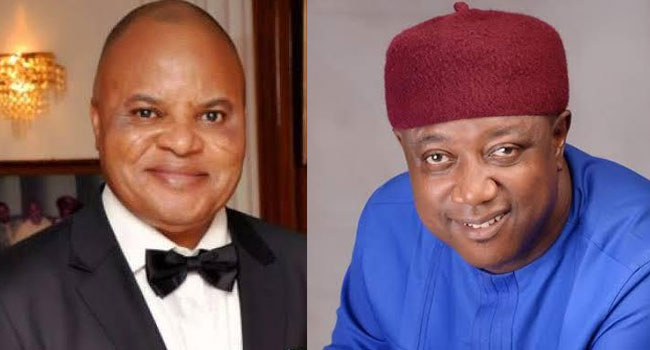 Ahead of the December 5 re­scheduled Imo North Senatorial bye-election, the leadership of the All Progressives Congress (APC) appears to be divided on who be­tween Senator Ifeanyi Ararume and Frank Ibezim flies the ticket of the party.

Although the party has sub­mitted the name of Senator Ararume in deference to recent court ruling, members of the Caretaker Committee appears to be divided with majority of the Caretaker/ Extraordinary Convention Planning Committee (CE­CPC) members in favour of Ararume. ­

Even so, Ibezim is said to be battling for his politi­cal life having appealed the matter.

He was declared winner at the primary election but a Federal High Court in Ow­erri reversed it and listed Ararume.

It was found that a few members of the committee led by former President of the Senate, Ken Nnamani, is backing Ibezim, while a size­able majority of the mem­bers are said to have queued behind Senator Ararume for the ticket of the party, who we hear has the backing of the APC governors.

Investigations conducted by Daily Independent, how­ever, revealed that the divi­sion in the Caretaker Com­mittee, which has the firm backing of the APC gov­ernors, may not be uncon­nected with the role played by Senator Hope Uzodin­ma, governor of Imo State, during the leadership crisis that swept Comrade Adams Oshiomhole out of office.

Uzodinma, it would be recalled, stood behind Os­hiomhole during the strug­gle against the wishes of his comrade governors who we learnt are now poised to pay him back.

Governor Uzodinma has favored the emergence of Ibezim for the Imo North senatorial seat.

Meanwhile, Senator Rochas Okorocha, former governor of Imo State, has expectedly filled behind his ally Ararume by donating his campaign structure, ‘Rescue Mission’, to the can­didate of the APC ahead of the rescheduled election for December 5.

The election was earlier scheduled for October 31 but the #EndSARS protest caused it to be postponed.

Sam Onwuemeodo, Spe­cial Adviser on Media to Okorocha, in a statement made available to newsmen in Abuja, quoted Okoro­cha as saying, “The Rescue Mission political structure would work with the All Pro­gressives Congress (APC) in the state and other political structures, including the Destiny Organisation, to ensure that Senator Ifeanyi Ararume, the APC candi­date in the Imo North Sena­torial bye-election wins the election resoundingly.”

Onwuemeodo said the decision was taken at a meeting attended by for­mer commissioners, APC state executives and select­ed leaders from each of the local government areas of the state.

According to him, Sen­ator Ararume would have been the Deputy Senate President today had he tak­en the advice offered him in 2019 by the senator repre­senting Imo West.

Onwuemeodo said, “The former governor also explained that the de­cision to work assiduously for the victory of Senator Ararume in the bye-elec­tion does not mean the col­lapse of the individual po­litical structures”, adding that after Ararume’s vic­tory, the structures would return to their respective bases.

“He also explained that the APC in Imo does not have problem again, adding that the picture about the fate of the party has now become very clear, noting too that, truth does not die, but what dies, with time, is falsehood or deceit.

“The Chairman of the Senate Committee on Cul­ture and Tourism equally called on Governor Hope Uzodinma not to take his quietness or peaceful dispo­sitions for granted, stating that he has remained quiet in the face of insults and blackmails, in the interest of the state.

“He thanked his former appointees, and all the mem­bers of the Rescue Mission political family for their steadfastness.”