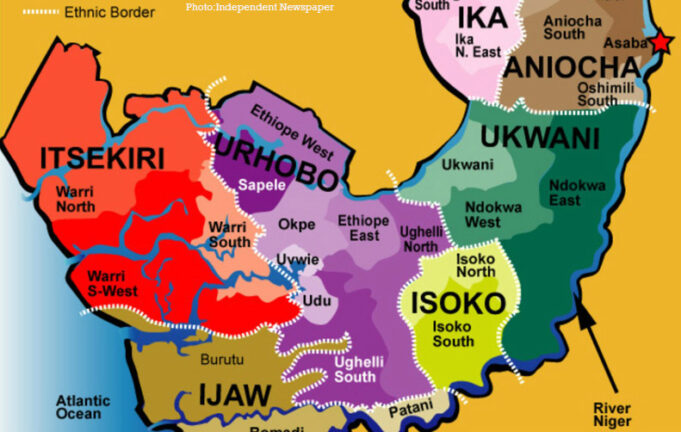 In lsoko land, oil explo­ration was traced to have begun in 1958 in Uzere in present day Isoko South Lo­cal government area, making Isoko second only to Oloibiri, Bayelsa state in 1956, where on-shore oil was struck in Nigeria. Since then, oil ex­ploration and production has extended beyond Uzere and covers many parts of Isoko.

This did not only attract the attention of Isoko Asso­ciation of North America (IANA), an umbrella organ­isation of people of Isoko descent living in North America, but committed to contributing to the economic development, social progress, and cultural vitality of the Isoko people in Delta State in the Federal Republic of Nigeria.

According to Chief Obaro Odu, President-General of lANA, the body would like to bring to the attention of the Federal and Delta State Government as well as the relevant oil companies that years of exploration and production activities by oil companies in Isoko land have had devastating impacts on the lives and livelihoods of the Isoko people.

The body lamented that over 62 years after the discov­ery of oil in their land, Isoko people are experiencing all the adverse impacts associ­ated with oil exploration and production, similar to those highlighted in the United Nations Environment Pro­gramme report on Environ­mental Assessment of Ogoni land released in August 2011.

“The soil in Isoko land is heavily contaminated by petroleum hydrocarbons. Oil pollution has denuded much of its mangrove and rain forest areas, reducing the size of arable land. Fish and other aquatic species have sharply declined as a result of oil-contamination of the creeks and rivers. Air pollution from gas flaring as well as contamination of the ground and surface waters have created severe health problems for people in most communities in Isoko”

He regretted that, com­pounding the sense of ne­glect of the Isoko people and lack of equity toward them, no Isoko indigene has ever been granted an Oil Mining Licence (OML), instead, the Isokos have been sidelined and marginalised in alloca­tion of OMLs/OPLs in their land, while persons from oth­er parts of the country have been so privileged.

“The Isoko people do not believe that OMLs/OPLs in their land should be granted exclusively to them, but equi­ty and fairness require that the Isoko people that bear the brunt of oil exploration and production ought to be beneficiaries of allocation of OMLs and OPLs. It bears em­phasis that among Isoko peo­ple, we do not lack persons who possess the business acumen, managerial com­petence, technical expertise, entrepreneurial drive, mor­al integrity and deep under­standing of the oil industry, all attributes required to be an active, responsible and successful participant in both the upstream and the downstream sectors of the industry.

Besides, he argued that the Nigerian Oil and Gas In­dustry Content Development Act 2010 (the “Local Content Act”) stipulates 70 per cent use of indigenous labor, ma­terials and resources in all oil and gas projects in country.

While disclosing that the Isoko ethnic nation has eight oil fields that presently contribute 19 per cent of the total of oil production quota in Delta state, he said the on­going 2020 bidding process for the 57 marginal oil fields in Delta state of Nigeria pro­vides an excellent opportuni­ty for the direct involvement of Isoko people in the oil ex­ploration business.

“We further demand that agencies responsible for the development of the region (NDDC, DESOPADEC and Oil companies) speedily put in place and implement pro­grammes that can contribute to the accelerated economic development of Isoko people.

“Firms owned by persons of Isoko origin be allocated OPLs and OMLs. Isoko per­sons should be granted the right of first refusal in the bidding process for marginal oil fields in Isoko land along with our Ijaw, Urhobo and It­sekiri brethren in Delta State. Undertake an environmental clean-up and remediation measures in Isoko. Establish­ment of modular refineries and corresponding Ecosys­tem Research Center in Isoko. Increasing crude oil produc­tion in the area by exploiting OML 28 fields.Upward Review of the 13 per cent derivation benefit to the Niger Delta re­gion” Odu warned.