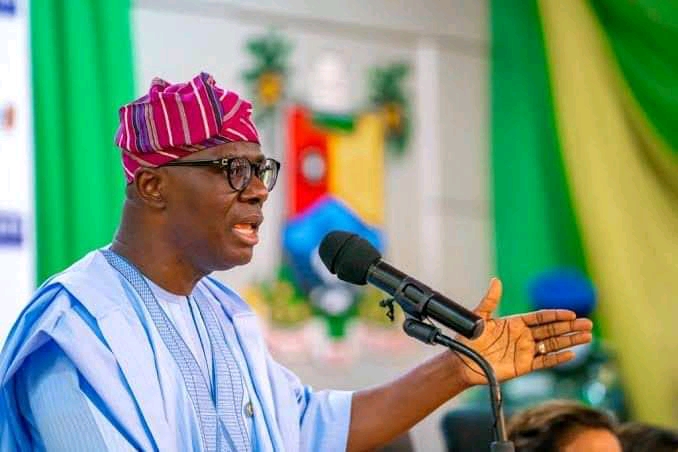 A total of 1,449 infrastructural projects have been commissioned in 1,036 schools across Lagos State.

Governor Babajide Sanwo-Olu made the disclosure on Thursday night during the closing ceremony and dinner of the 61st Independence Anniversary of President’s National Inter-Basic School Debate Championship held in Alausa, Ikeja.
Governor Sanwo-Olu, who was represented by the Lagos State
Commissioner for Education, Folasade Adefisayo, in his address, said 96,334 dual composite units of furniture were supplied to primary and secondary schools across the state.

Sanwo-Olu said: “So far, our government has delivered over 1,449 school infrastructural projects, covering 1,036 schools across the state. Our government ensured prompt construction and rehabilitation of dilapidated public schools, while 96,334 dual composite units of furniture were supplied to primary and secondary schools across the state
“As an inclusive government, we are committed to ensuring that high quality education is accessible to all learners irrespective of their locations through effective and efficient management of resources for the attainment of self- reliance and socio-economic development.

“This government is convinced that teaching and learning can only take place effectively in a conducive atmosphere, thus, our commitment to the provision of new structures and the rehabilitation of existing ones.”

At the event, organised by Presidents School Debate Nigeria, in collaboration with Universal Basic Education Commission (UBEC), Sanwo-Olu commended the Federal Government for  the programme, saying it would bring about socially stable and self-reliant students, promote unity and cohesion, as well as encourage them to work harder in their studies.

Permanent Secretary, Lagos State  Ministry of Education, Abayomi Abolaji, who spoke on behalf of the commissioner, said the competition would showcase the strength of the students who represent a greater tomorrow.

National Coordinator of the President’s School Debate Nigeria, Dare Oritu, in his welcome address, read by his Deputy, Dipo Ibitoye, said a total 10 teams, which comprise nine states and the Nigerian Police team, were involved in the Championship and that it would help winners to participate in international competitions.

He added that the programme in the last 20 years had helped in the delivery of Universal Basic Education in Nigeria.
Executive Secretary, UBEC, Hammed Bobboi, said the competition would further enhance the delivery of qualitative education, promote the reading culture among students, display their talents and the acts of speaking in public.

Ezeya Esther from Lagos State was awarded as the best speaker of the tournament while the best behaved team was the Police.

Awards were also given to those who have performed well in the education sector. Among them is Dr Femi Majekodunmi, who was awarded the best SUBEB chairman in the South-West region.

Kwara State, which emerged winner of this year’s 61st Independence anniversary of President’s National Inter-Basic School Debate Championship, was given a trophy and would represent Nigeria in the next international competition.

NAFDAC Must Approve COVID-19 Vaccines Before Use – DG