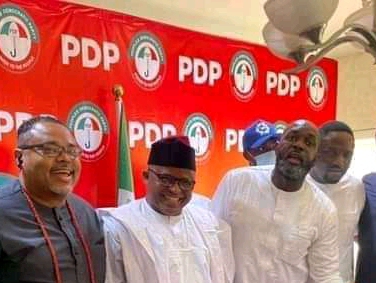 The former governor of Anambra
State, Peter Obi, on Thursday finally picked the expression of interest
and nomination form to join the
presidential race.

The expression of interest and
nomination form was purchased on
his behalf by a group, under the aegis of “Like Minds for Peter Obi.”

“We believe that if we cut down
the cost of governance, the country
would move in the right direction.
And we’ve been following, we are
different individuals in the group,
professionals, businessmen, public servants, different categories
of contractors, artisans, we have
members from everywhere in Nigeria, we’re fully represented.

“We want the country to move
forward. We think Peter Obi can
steer it forward and we believe in
him because we’ve seen what he did
in Anambra when he was governor.
And we have heard him talk; he has
the wealth of experience to lead Nigeria to the promised land.”

Nwakuche added: “We’re not
in this thing because of any gain.
We’re doing it because of our unborn children. If we don’t get it
right this time around, this 2023,
I don’t know where we’ll be..

Each
and every one of us here knows
how the country is and we want a
better Nigeria. And I believe that
if you’re from Nigeria, be it from
the North, South, East, West, and
you know, you want a better Nigeria, I don’t think there’s any other
person that you’ll support than
Peter ObI.