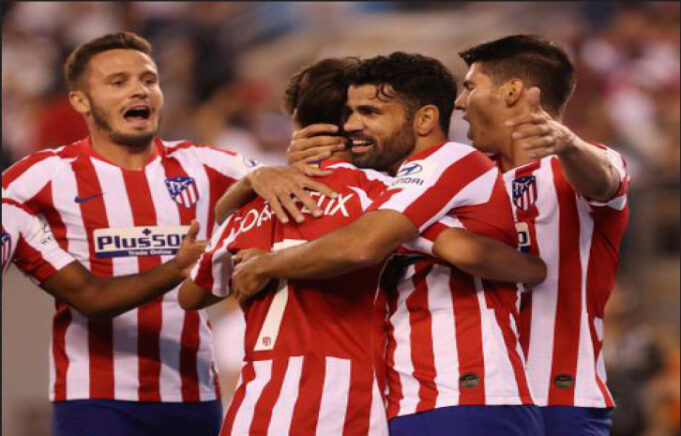 Atlético Madrid defeated Valencia 1-0 with a late own-goal to extend its winning streak to six matches in the Spanish league on Saturday.

The own-goal by Valencia defender Toni Lato in the 79th minute left Atlético tied with Real Sociedad at the top of the standings with a game in hand. Sociedad hosts third-placed Villarreal on Sunday.

The goal came after the ball hit Lato’s leg following a low cross by Atlético midfielder Yannick Carrasco from the left flank. The ball ricocheted backward and struck the post before going in.

Luck also plays a role sometimes,” said Carrasco, who came into the match in the second half. “It’s always hard to play here, so we are happy to have won the match.”

Atlético is yet to trail in the league and remains the only unbeaten team. It hasn’t lost in the league in 25 matches, going back to last season.

Diego Simeone’s team has a decisive match against Bayern Munich in the Champions League on Tuesday.

“Everyone knows that we only think about our next match,” Simeone said. “We have a huge one in front of us and we obviously need a good result.”

Simeone was moved by a pre-match tribute to former Argentina teammate Diego Maradona at Mestalla Stadium.

“I believed it was important to say one final goodbye by applauding him,” Simeone said.

Valencia dropped to 10th place after failing to beat Atlético for a 12th straight time in league since 2014.